I work for 4CT, a charity based in East Manchester, and 12 months ago we were offered the opportunity to turn the old Broadhurst Park Surestart into a community centre! 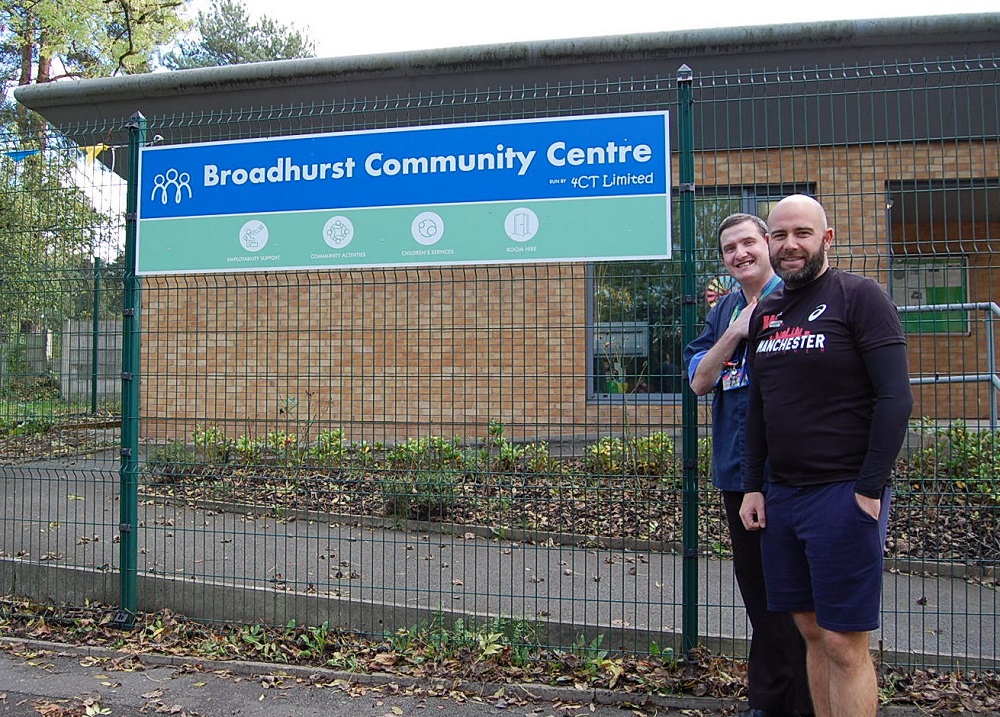 What have we done?

It’s very difficult without money to make things happen but I’ve been very lucky to have had the support of many within the Moston community. My initial focus was to concentrate on getting the centre busy and above all recognised as a community centre for all ages.

It was clear that the building was fondly thought of amongst local parents so we looked at developing some classes for the younger children. A local parent got in touch called Sarah Foster. Sarah is multi skilled and qualified in childcare. She shares my passion and visions for the centre and we now run numerous stay and play sessions throughout the week. They’re very popular and have developed a real sense of community. 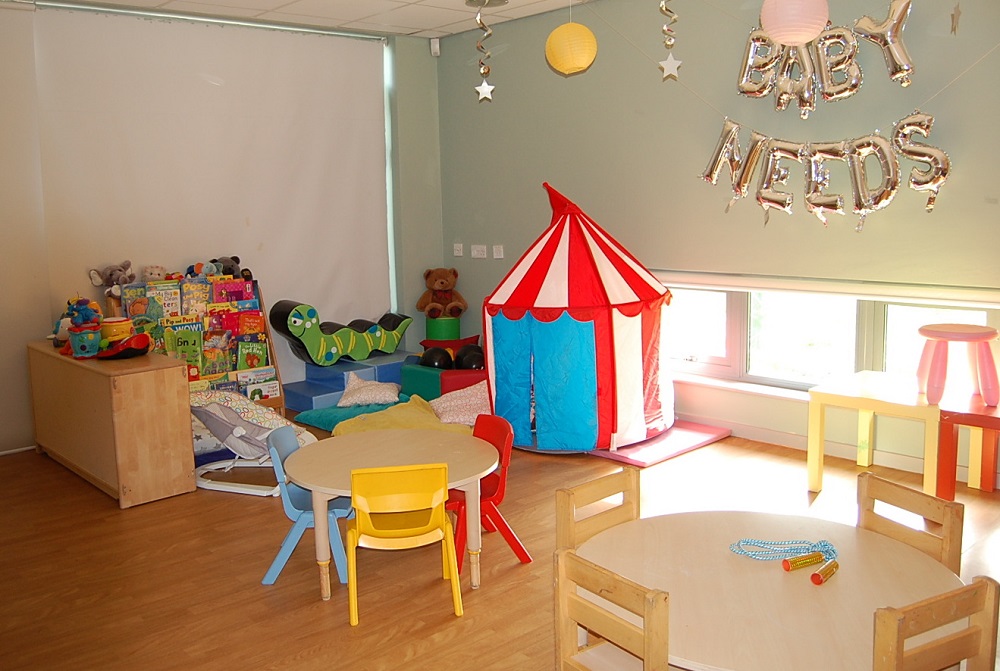 Another person who is passionate about the centre is Michael Green. Michael’s been involved here for many years and we’ve built on his walking group and coffee mornings. It’s safe to say you won’t meet many kinder people than Michael. His groups are thriving but always looking for new members.

A key focus of the centre is health and fitness and we’re very proud to have our own Broadhurst Community Running Club. It runs twice a week with one session focused on family fitness. We also offer two Hiitstep classes every Monday evening run by the amazing Leonie Painter from Mostonian Coaches. Definitely an energising way to start the week. 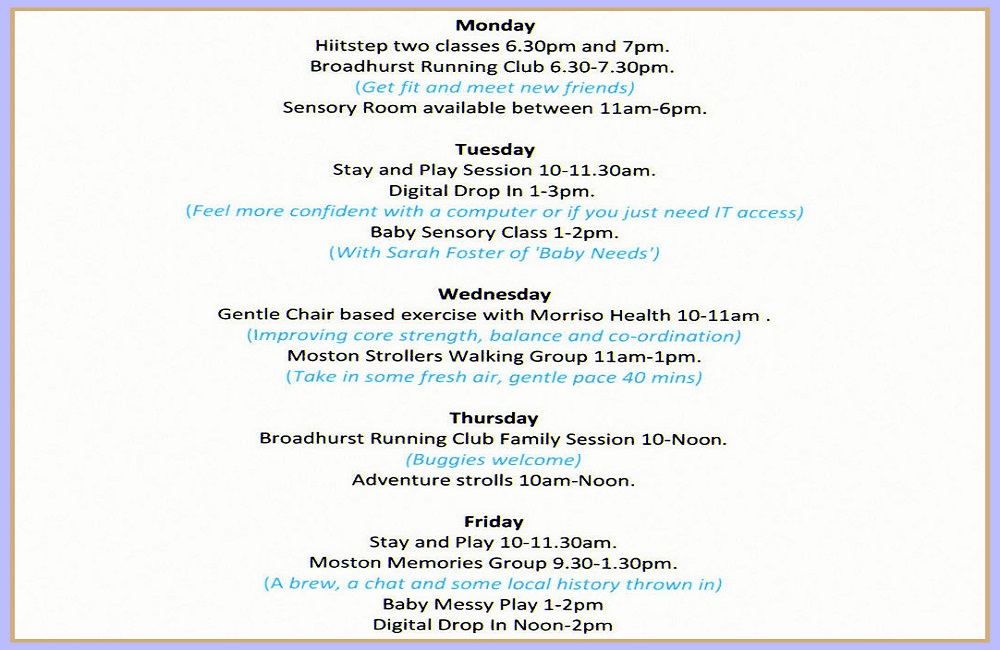 We also have a monthly Night Owl Walking Group, our sensory room is amazing and we’re planning a Halloween Party later this month, as well as a coach trip to Blackpool.

In December we’ll be giving the ‘Manchester Christmas Pudding 5 Mile Dash’ a bash and have lots of activities planned in the run up to Christmas. Further ahead there are plans for a small allotment to complement our outside play area, which is perfect for sunny summer days. 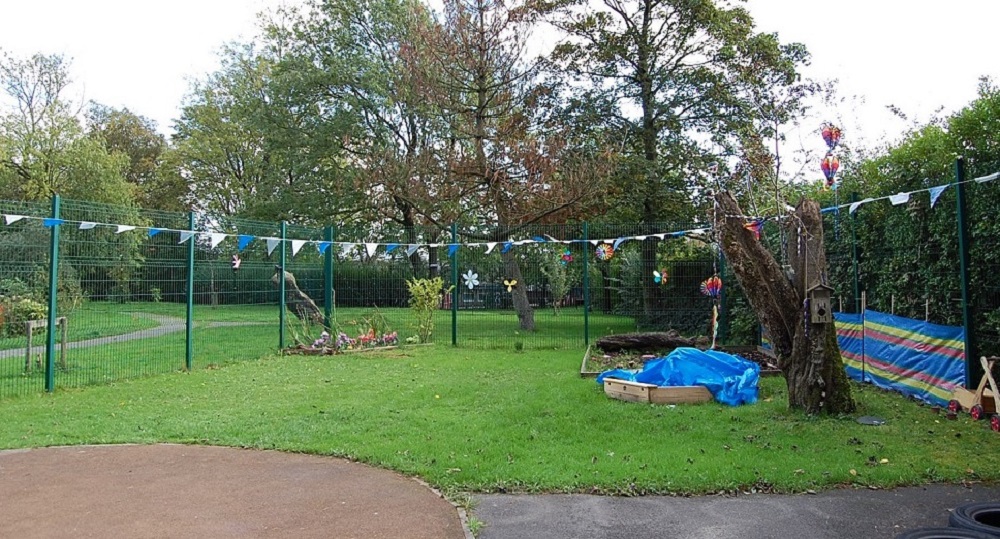 It’s been an amazing ten months but we have a long way to go. My vision is for the centre to be used seven days/evenings a week, offering activities that meet the needs and interests of local people. For it to be known by everybody in the community (some still don’t know we are here) and be self-funding.

I am extremely proud of the work we’ve done so far and the team I have around me.

Last but not least I’d love the Broadhurst Community Running Club to complete a race in 2020.

Looking forward to seeing you.

As some activities need to be pre-booked and incur a small charge please get in touch or call in for details. Information can also be found on our Facebook page.

Sarah’s ‘Baby Needs’ facebook page can be found by clicking here and to read more about Morriso Health click here.

In the 1950s it was a child’s lot to run errands. The early years spent with mum or nan was a sort of apprenticeship for shopping alone. Soon you would be in a position to say what number you wanted the bacon sliced on, or whether custard creams were an acceptable substitute when they were out of gingers. 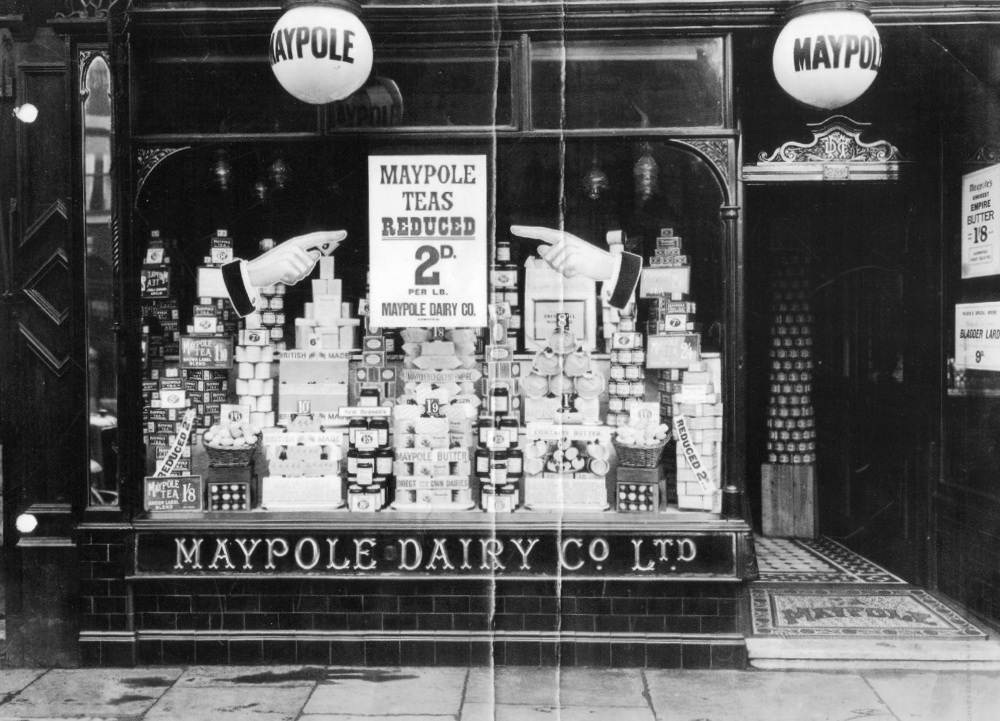 Moston had its specialist shops but almost every street corner had an ‘Open All Hours’ type store, selling everything from Butter Puffs to mothballs and face powder. The one we used had formerly been a terraced house. There was no display window and the door was in the blank gable end wall. On entering, it was bundled firewood stacked under the staircase that first attracted the eye.

The former living room had an L-shaped counter, fronting shelves stacked high with goods. But today’s shopper would be confounded by the lack of choice. Two kinds of bacon were available, middle and rody (streaky) and two kinds of cheese – Cheshire that we bought and Cheddar which we didn’t.

In the queuing area, there was a display unit of deep, glass-topped biscuit tins. These had to be passed across the shoulders of customers for the biscuits to be weighed and bagged up. Roast ham was expertly carved with a long bladed knife, but bacon was sliced to the selected thickness on a hand turned bacon slicer. Because we kept chickens in the back garden, I escaped the potential pitfalls of carrying home a paper bag full of eggs.

It was dinned into the young that even when well wrapped in newspaper, firelighters and soap powder must be kept separate from food stuffs.

If there was no (mechanical) cash register, our purchases were tallied up in pencil on a paper bag, and totalled at lightning speed – no mean achievement in pre-decimal days. 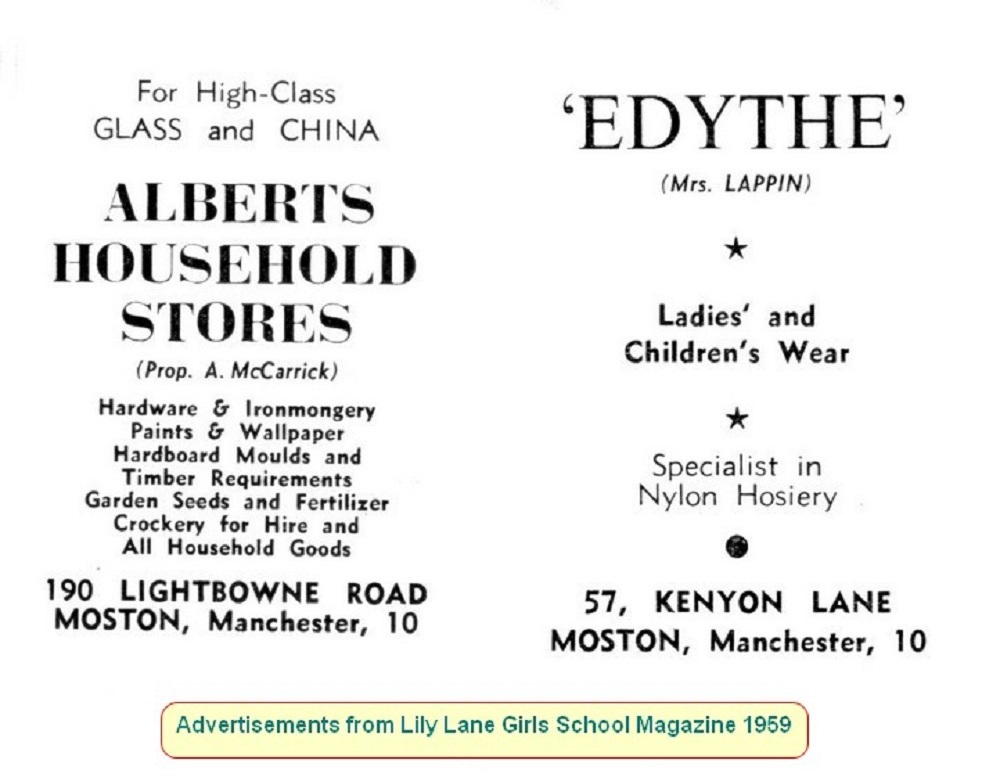 On Ashley Lane there was a chemist, baker, newsagent, butcher, and green-grocer who also sold wet fish. Vegetables came loose and unwashed, necessitating a dedicated ‘potato bag’. Ours was made of rexine, an artificial leather-cloth produced by a company in Hyde. As a boy, my father once forgot the all-important bag, and was told to hold out his gansey (sweater). He did so, and 5 lbs of King Edwards were unceremoniously tipped into it.

As the bakers only provided paper bags and tissue paper, it was advisable to take a wicker basket or straw shopping bag for pies, hot bread and iced fancies to stay intact. To get your pies, the ritual was to pay an assistant who would then pencil in a series of mysterious symbols on the ubiquitous paper bag, before placing it at the bottom of the pile. Every eye in the queue was fixed on that stack of bags to make sure they remained in strict order.

The bakehouse was on the opposite side of the road, so pies arrived straight from oven to shop, on the head of a man carrying several wooden trays covered in a cloth. When he was spotted, a ripple ran through the queue and I prayed the current batch wouldn’t run out before the bag with our order came to the top of the stack.

Within easy walking distance, we had a chip shop, ironmongers and Post Office. If Mr Barratt was serving, going to the chippie was definitely my favourite errand. He would always wrap a small piece of white paper around a couple of fat chips to be eaten on the way home. 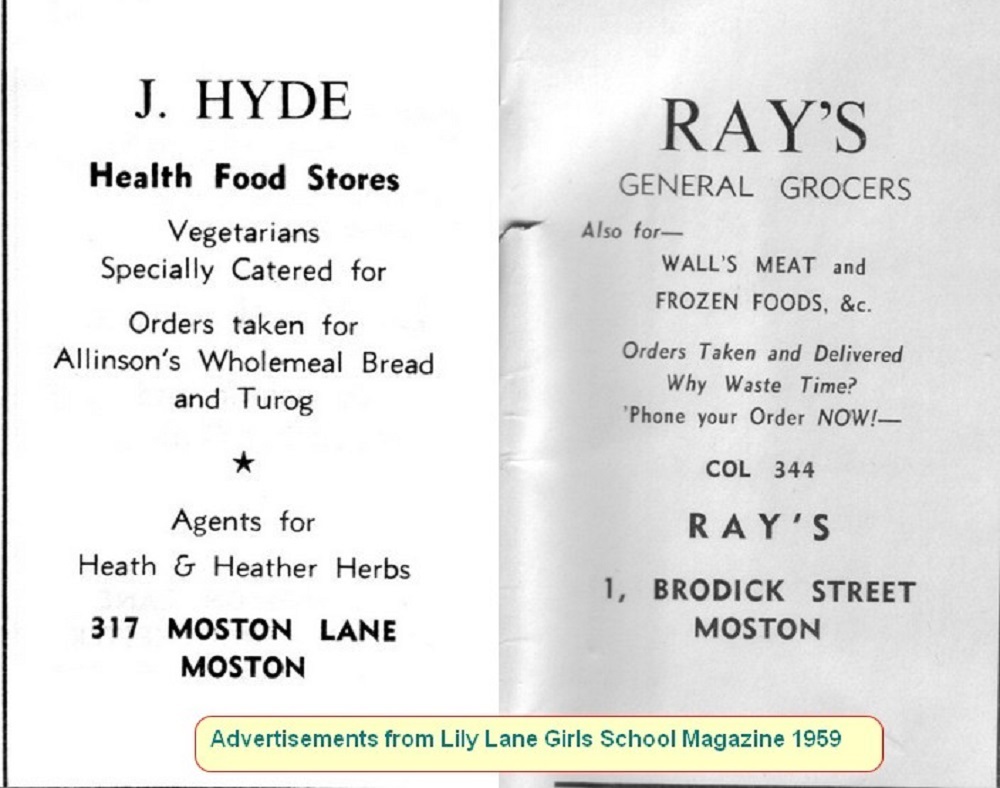 Saturday was the day for ‘the lane’. The shops on Moston Lane were there to supply all our needs from cradle to grave. There was the Maypole grocers, shoe shops, drapers, dry cleaners, and yes, even an undertaker.

In 1956 we moved to New Moston and became enthusiastic members of the FIS Co-op. My sister served her shopping apprenticeship at their Broadway stores. The large grocers had various ‘departments’ with separate counters. As each had its own queue, the trick was to send a child to the longest to keep a place for mum while she got served at a shorter one.

If you went an errand alone, the mantra was ‘don’t forget the divvy (dividend) number’. For each transaction, the amount spent along with your number was written on a perforated paper counterfoil. The shop kept a carbon copy, and after a specified time, the total amount spent was added up and a percentage annual dividend paid out. Divvy money often went toward Christmas luxuries, so that all important number needed to be etched on your brain. 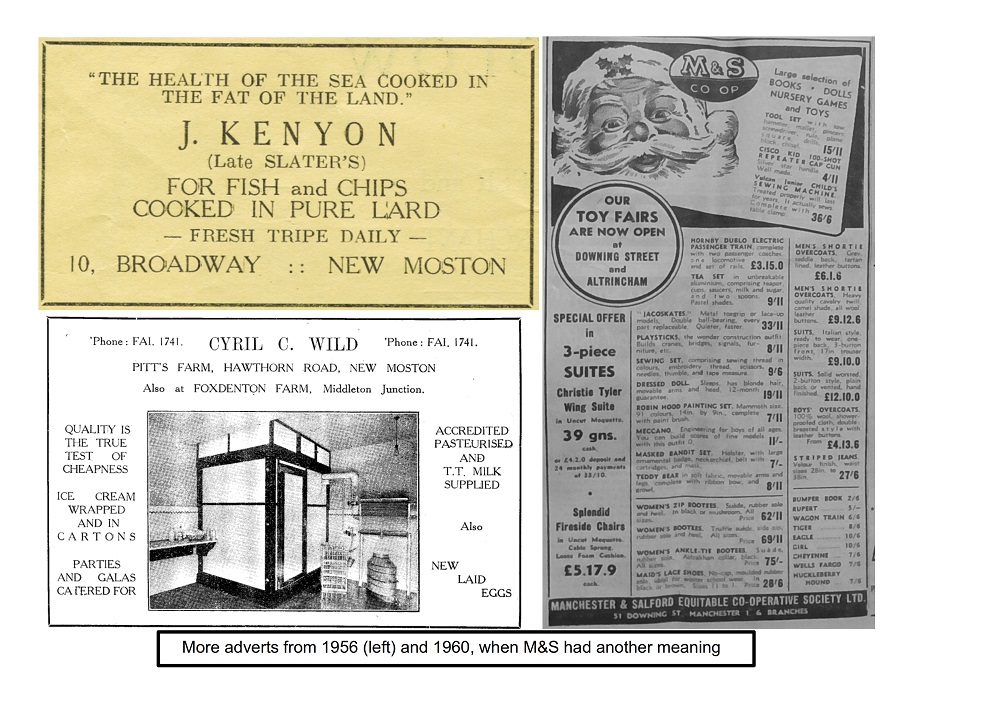 To my mind, supermarkets will never replace the convenience of nipping round the corner for a bottle of Camp coffee, OK Sauce or a roll of Izal, which when not performing its primary purpose, made excellent tracing paper or a comb kazoo.