How many Blackley residents now know of the role once played by this well-loved park in the history of womens’ suffrage?

On Sunday, 5 July 1896, some 40,000 people gathered at an open-air meeting in the park to hear an address by James Kier Hardie, one of the founders of the Independent Labour Party, along with Richard and Emmeline Pankhurst, and others. The party had been formed following disillusionment with the Liberals, who had repeatedly failed to deliver on many social improvement policies, including extending the right to vote to ordinary workers – and women.

A number of ILP meetings had been held in the Clough when it was a private estate but, after purchase by Manchester Corporation in 1895, the Parks Committee decided to suppress them. In May and June 1896, a number of arrests were made and some speakers were fined, but chose to serve a month’s imprisonment rather than pay. The dispute now centred around free speech in public spaces.

During the 5 July meeting, Keir Hardie, the Pankhursts and others were arrested for supposedly “causing an annoyance”. Magistrates heard the testimony of local residents, none of whom seemed remotely annoyed, and Richard Pankhurst pointed out that there was no such offence as “causing annoyance” anyway.

Meanwhile, further meetings were held and at one of these a defiant Ben Tillett addressed 30,000 maintaining that, as the park had been purchased with public money, the public had every right to hold meetings there if they wished. It was the same in many other towns and cities. Eventually, the Parks Committee, urged by the Home Secretary, decided that such meetings were lawful and most of the charges were dropped.

One bright Sunday afternoon ten years later on 15 July 1906, another meeting in favour of Votes for Women was addressed by Keir Hardie and Emmeline Pankhurst’s daughter Adela. The site was described as “north of the main road through the park, where three hills form a natural amphitheatre”.

No estimate of the number attending was given, but the speakers were hemmed in on all sides when 100 or so organised protestors surged down the hill at them. They were almost crushed. Their escape was hampered by the sheer number of ordinary listeners, who were mostly sympathetic, but packed closely together. Several of the speakers suffered blows and torn clothing but managed to slip away in the ensuing confusion. 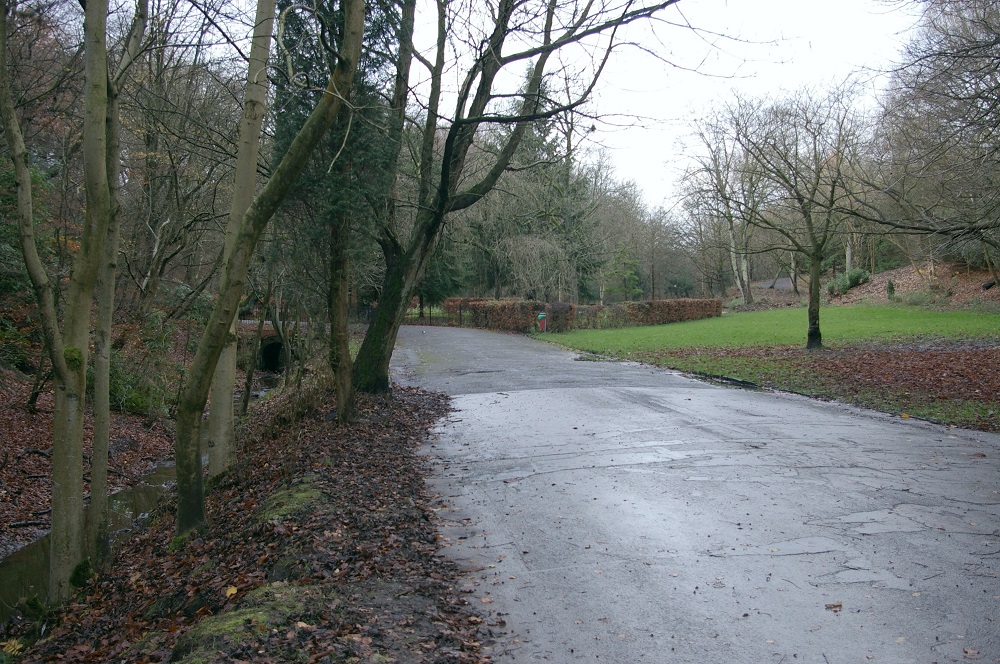 Location of the former drinking fountain and refreshment rooms in Boggart Hole Clough, possibly the site referred to for the 1906 meeting

Keir Hardie, who had recently courted bad publicity criticising the government’s brutality towards the Zulus, and Adela were particularly targeted. The most easily recognised, they were chased up one of the other hills and round an adjacent field by the mob, causing great damage to the trees and shrubs. Adela was shielded by three or four local men and almost made it out of the Clough, but was pursued again after a shout of “Here she is!” brought the mob nearer.

By sheer luck, Keir Hardie and Adela found themselves together again, both exhausted. By slipping away down the wooded valley side, they managed to climb over iron railings leading to Charlestown Road. The mob attempted to follow, but the fugitives by now had a good start and slipped away into a nearby cottage.

Suffragists had become used to jeers and heckling over many years, but the wanton violence displayed at Boggart Hole Clough and other places, simply hardened attitudes on both sides. It was hardly surprising that some protestors, labelled Suffragettes, became increasingly militant.