For me, Advent meant nativity plays, Father Christmas in his grotto, a church fair and the school Christmas party. But it also had its low points.

When choosing Christmas cards, mum read every single one to find the verse exactly suited to each recipient. I consider the amount of time spent standing at the card counter in Woolworth’s basement was borderline child abuse.

The place to be at Christmas was Lewis’s. In the fifties, the sales floors surrounded an atrium known as the dome. Throughout December it was strung with fabulous decorations that twinkled and swirled above the shoppers. Gazing up, enveloped in the scent from the Bromley lemon soaps, made it seem like wonderland. 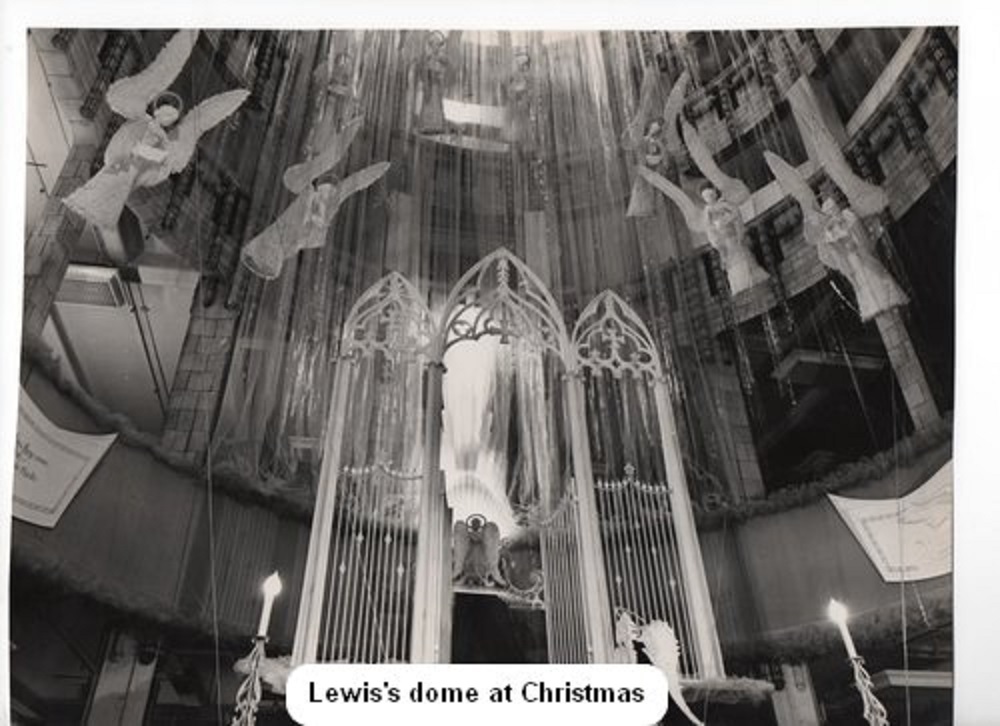 Queuing for Father Christmas was an annual ritual, but the cardboard and cotton wool grotto was something of a let down after that amazing dome. However, the ‘gift’ of a toy sweet shop, post office, or bus conductor’s set, was some consolation for that interminable wait.

Our girls school was small, but the nativity play we put on was not the usual tea-towel headgear and shaky rendering of Silent Night on the recorder. We pulled out all the stops – three performances on a proper stage, with girls playing male characters transformed by real wigs and beards. My debut role was as a page, but I gave up ‘the’ stage’ in favour of music when I was twelve.

The orchestra’s chief function was to accompany the choir; however the musicians were allowed their own moments of glory. I still recall the thrill of playing The March from Handel’s Judas Maccabaeus, as the 3 kings and their extensive entourage processed down the centre aisle. 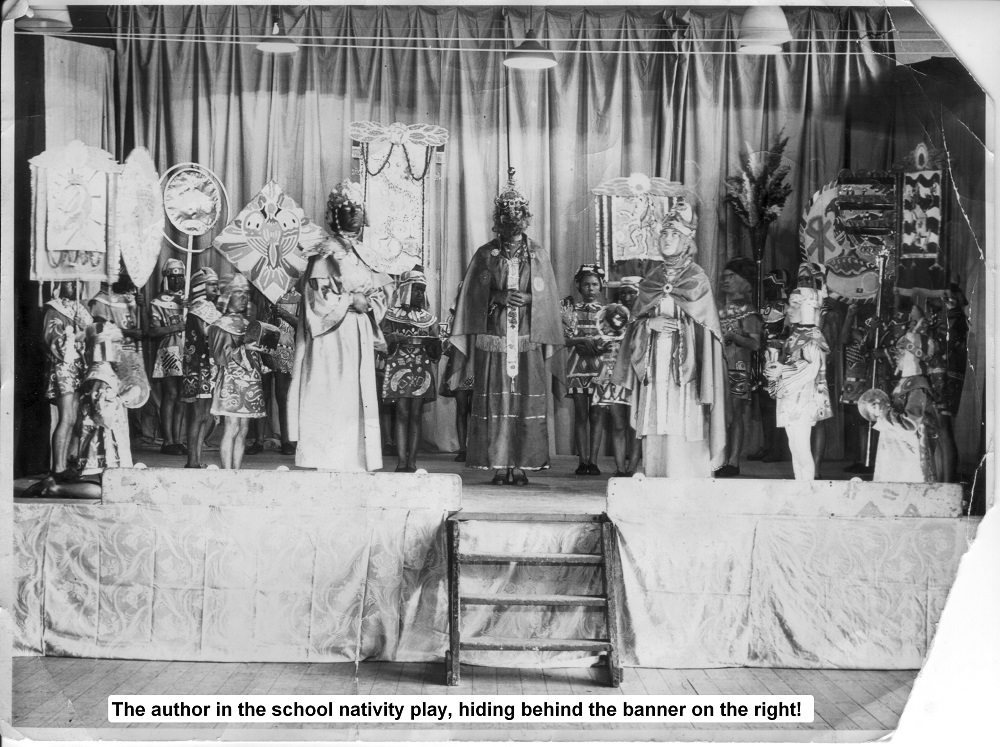 At home, twisted streamers, paper chains (homemade) and a few balloons constituted our decorations. For the ‘Christmas tree’, picture a piece of dowel stuck into a 6-inch diameter block of wood, painted red. Then imagine stiff, dark green bottle brush ‘branches’ in a shape something like a fir tree. The bare wire ends of the branches were once tipped with artificial berries, but they had long since disappeared. My job was to roll red plasticine into little balls and stick them onto the wire, to avoid anyone’s eye getting poked out.

The notoriously unreliable lights went on first, followed by tinsel, glass globes, chocolate decorations and candles in clip-on holders. My wish for a real Christmas tree came true when I got married, but I still have fond memories of that old bottle brush relic.

My sister and I raced to the doormat to collect the 4 or 5 deliveries of Christmas post per day. Mum’s rule was, cards could be opened and read but our totally uninterested father must be allowed to see them before they were put up on the picture rail. When the last card went up on Christmas Eve, the halls were deemed well and truly decked.

Certain food stuffs only appeared at Christmas. Nuts in their shells, russet apples and tangerines were displayed in the best fruit bowl. A small weekly amount paid into the grocer’s Christmas club provided luxuries such as a large tin of assorted biscuits, crystallised fruits and Roses lime juice. And in case of unexpected visitors, there was a tin of Old Oak ham on stand-by. 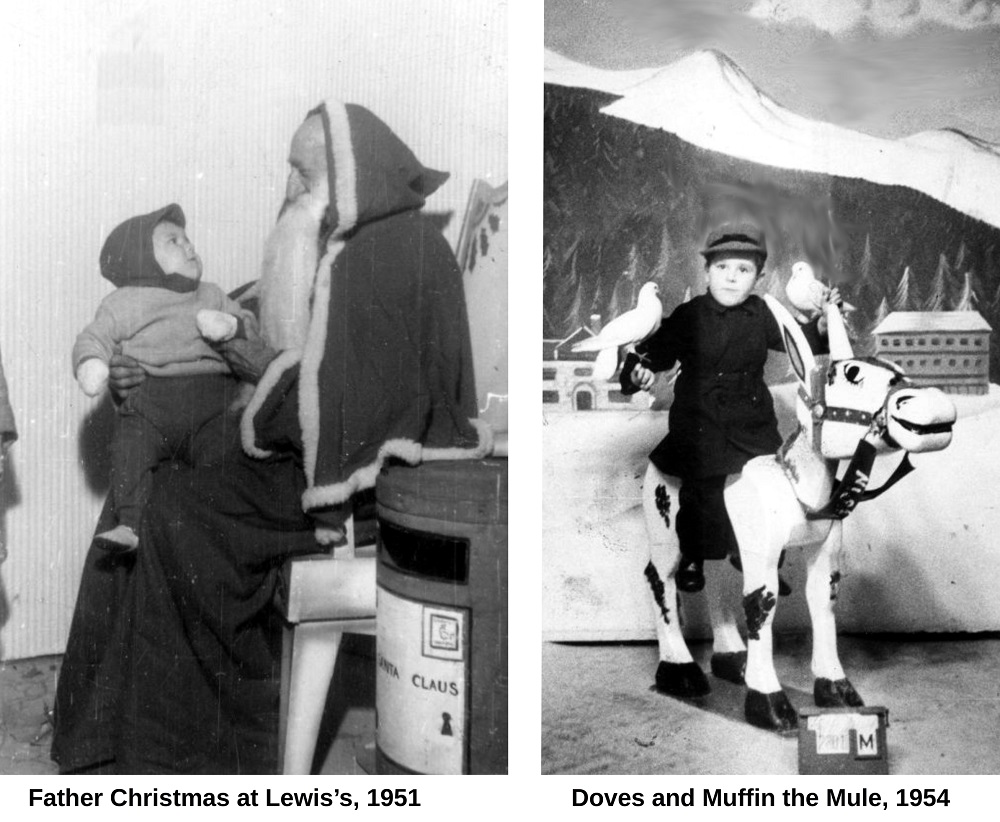 Alcohol wasn’t routinely found in most homes, but at Christmas we pushed the boat out with a bottle of QC port and a sherry. By the end of the decade, Babycham had made an appearance, and one year we even had advocaat (ugh).

I recall our delight when the Co-op divi stretched to a beautiful, Christmassy country cottage. When the cotton wool snow-covered roof was lifted off, there were small presents and paper hats inside. Possibly it replaced the crackers which, along with festive paper serviettes, were all that distinguished the Christmas table from every other meal time.

With turkey now relatively cheap and plentiful, it’s difficult to imagine that in the fifties, there were families who had never tasted it. Generally our bird was a large capon with plenty of stuffing to make it last out the two day holiday. Fresh cream was unheard of, so pudding was served with hot custard.

Mince pies were baked at home, but the iced Christmas cake came from the local bakery.

On Christmas afternoon, the family gathered for cold meat tea at the grandparents. This was followed by games, with our perennial favourite being roulette. For ‘gaming chips’ we used the pennies and ha’pennies set aside for the gas meter or bus fares. Croupier granddad made sure nobody ever lost more than a few coppers before we were sent off to bed.

The country’s war debts had resulted in an export drive that kept goods in short supply on the home front. It wasn’t until the mid fifties that ‘luxury’ and consumer items began to appear in the shops again.

Thankfully you don’t miss what you’ve never had, so we youngsters were blissfully unaware there was any other way to celebrate Christmas than the one we knew.