“We’ve been involved with the LRG (Local Reference Group) from the beginning,” Rob tells me. “It’s all about Harpurhey and Moston and, as we’re based here in the middle of Moston, getting stuck in was a no-brainer.

“We’ve got history with Forever Manchester,” he says as we chat before their weekly rehearsal. “We’re one of their cultural ambassadors and we big them up whenever we can.”

Rob Lees and Jill Hughes set up MaD Theatre Company 21 years ago. They’ve never had regular arts funding like some theatre groups and at times it’s been a struggle. Instead they’ve applied for pots of money here and there and, with heads down, they’ve got on with it.

“So, what’s being on the LRG ever done for you?” I ask, tongue in cheek.

“Actually, it’s been really good,” says Rob. “Up until a couple of years ago we were very much on our own. But with all the cuts it was getting difficult and we had to re-think how we worked. Partnership working was the way forward and Forever Manchester has encouraged that.

“Now we are partnered with Collyhurst and Moston Amateur Boxing Club and with FC United. Already we’ve done joint projects together.

“Last year we did this,” Rob digs out a colourful flyer from under a stack of scripts on his desk, “Conceived in a Curry House. It was a play about the history of FC United, performed by some of the football club members and our own. And that was funded by Forever Manchester.”

“Do you think you got the funding because you were in partnership together?”

“Completely,” says Rob. “We’ve since done another project with the football club and boxing gym all about youth leadership. Members from all three of us came together and we encouraged our juniors to become youth leaders.

“Our whole thing is about bringing art and sport together because people can never imagine them together.”

Rob tells me of another joint project with the boxing gym, commissioned by the Home Office, all about the danger of gangs. “That got toured around local secondary schools,” he says, “The Police and the Home Office loved it.”

This year Collyhurst and Moston boxing gym celebrate their centenary and, if a joint bid to the Heritage Lottery Fund is successful, they and MaD will collaborate with the archive people at Central Library on an exhibition and film.

“We’ll be using their young boxers as actors,” says Rob enthusiastically, “to play their predecessors from way back.”

There are other projects too. One with Manchester Metropolitan University – funded by Comic Relief – that sees local young woman in danger of joining gangs diverted into, yep, drama, boxing and football.

“And that too has been a result of working in partnership?” I ask.

“Yeah,” says Rod. “Genuinely it’s been a great thing. Oh, and there’s our collaboration with a construction company and an orchestra…”

“Stories like yours will be inspirational to other groups,” I say, “and that’s one of the reasons for writing this blog. I can guess what you’ll say, but what advice would you pass on to other community groups right now?”

“It’s about collaboration. Partner up with other organisations that have the same values. They don’t have to be doing the same things. Think out of the box: drama and football, drama and boxing. In many ways it’s better if they’re completely opposite and funders will go, Wow, what’s that?”

“What do people get out of being in this group?” I ask Barbara.

“You’ll have to ask them,” she says. “But what I can tell you is, we don’t lose anybody. They come back week after week.”

“How long have you been going to the group?” I ask Trevor.

He sucks in his cheeks. “About four years. I came first and then Denise followed on,” he says. “I came to get away from my problems and she followed me!”

“He loves me really, don’t you?” says Denise, prodding her husband.

“I thought I’d just come for a week, that was three years ago,” continues Denise. “I do suffer from depression and this takes my mind off it. It’s better than sitting in the house. I need something to keep me occupied. If I hadn’t got this, there’d be nothing.” 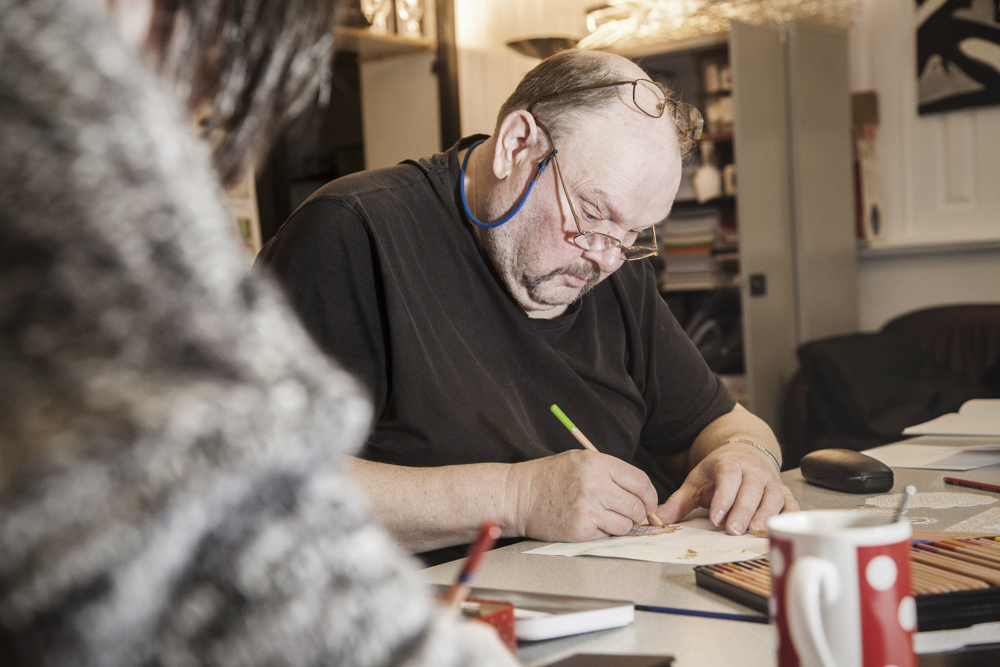 There are dozens of places like this across Manchester, thousands across the country. Small groups, surviving on next-to-no money, supported by selfless volunteers. Their compassion towards those with poor mental health or low income seems at odds with a bigger picture of insensitive cuts and austerity.

It’s difficult, probably impossible, to measure the savings these small groups make to the statutory services.

A weekly card-making session with this group of friends could mean Denise doesn’t tip up at the GP as often as she might. 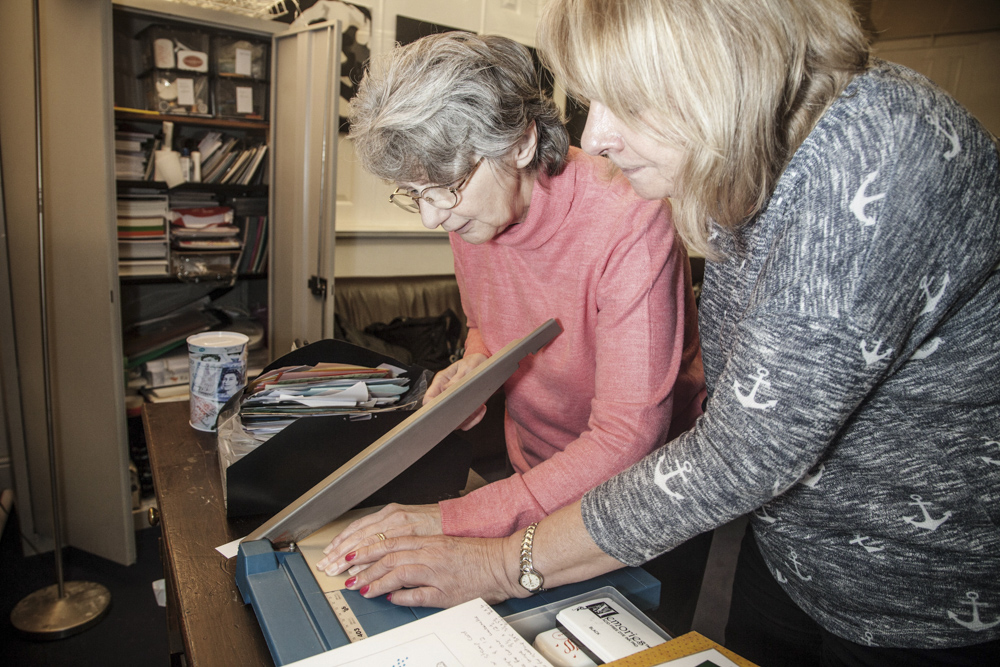 “We do rely on funding,” says Barbara, “Most people here are on benefits or low income. We charge £2 for the day but that won’t cover the rent or the materials.I’m strict about using top quality materials because I want people to be proud of what they’ve made.

“Through the Fourteen programme Forever Manchester helped us out last year with running costs. We were able to buy lots of new materials.”

Barbara’s been on the Local Reference Group (LRG) for a couple of years now. It’s a sort of self help group as part of the Fourteen programme to support community groups in Harpurhey and Moston.

“It’s become like a little family,” says Barbara. “We’re very supportive of each other and we’ve  expanded now as more people have joined us.”

“Do you feel a sense of connection with other people because of the LRG?” I ask.

“Oh yes. We’ve learnt lots about what else is going on. Although we’ve never felt isolated. Lou here at The Miners has been very good to us and,” – she nods in the direction of Broadhurst Park – “FC United have been very supportive as well.”

I take my tape recorder around the table again. “What about you Ann? How important is this group for you?”

“Most of my neighbours are either very old or have young families,” she says. “There’s no one my age.  So this gets me out of the house, seeing somebody, talking to somebody. Sometimes I can open the front door and realise it hasn’t been unlocked for the past three days.” 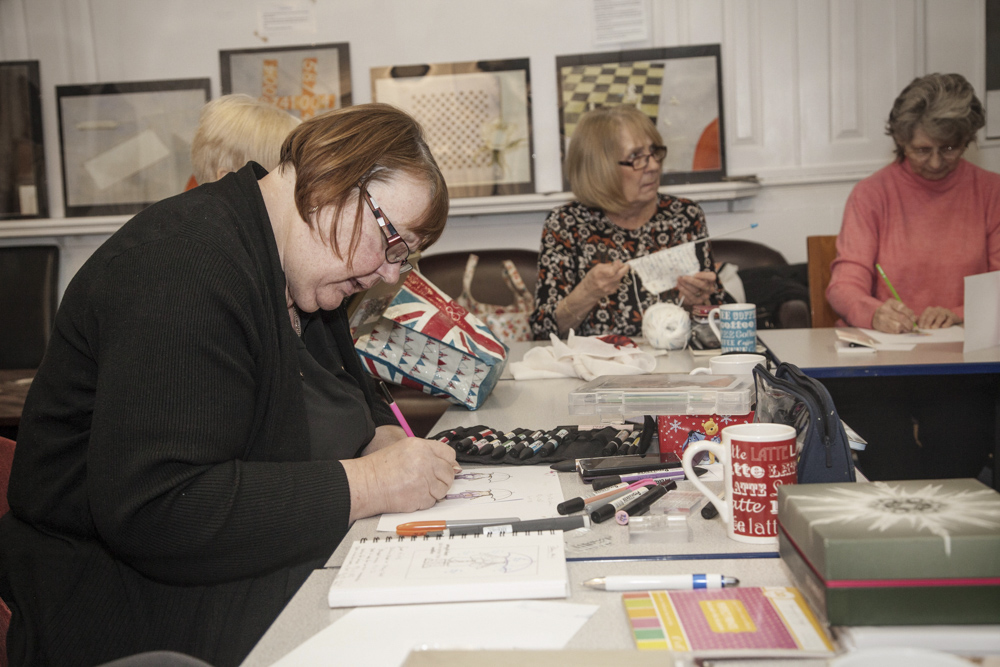 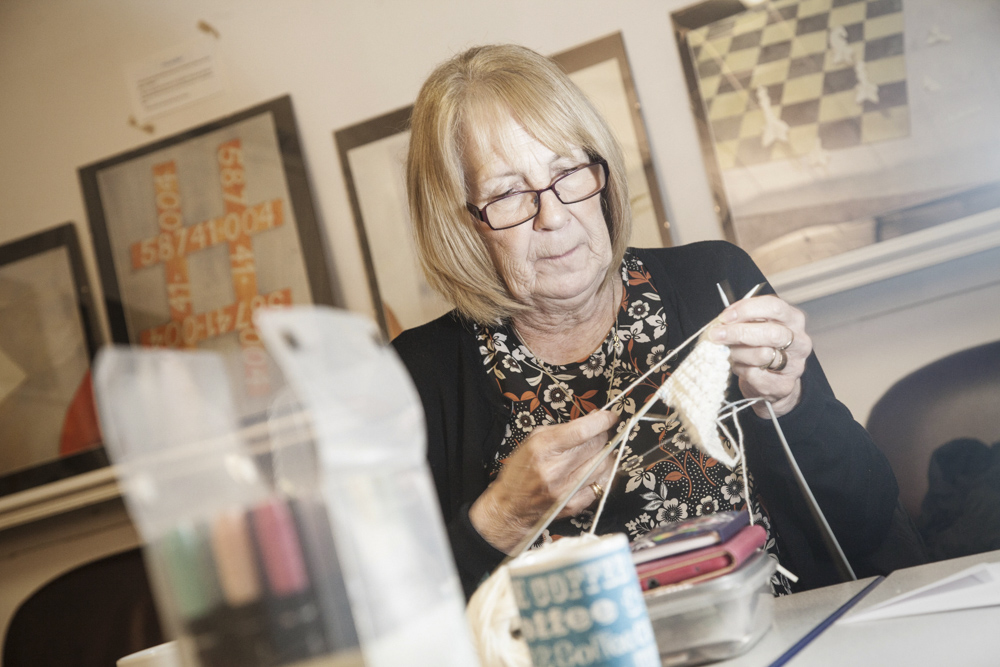 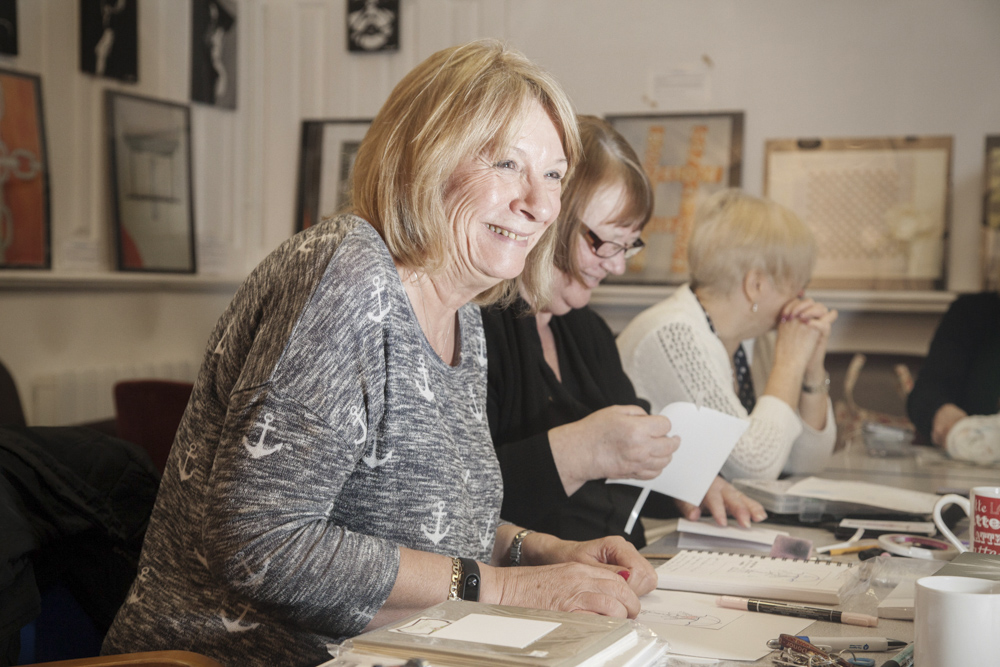