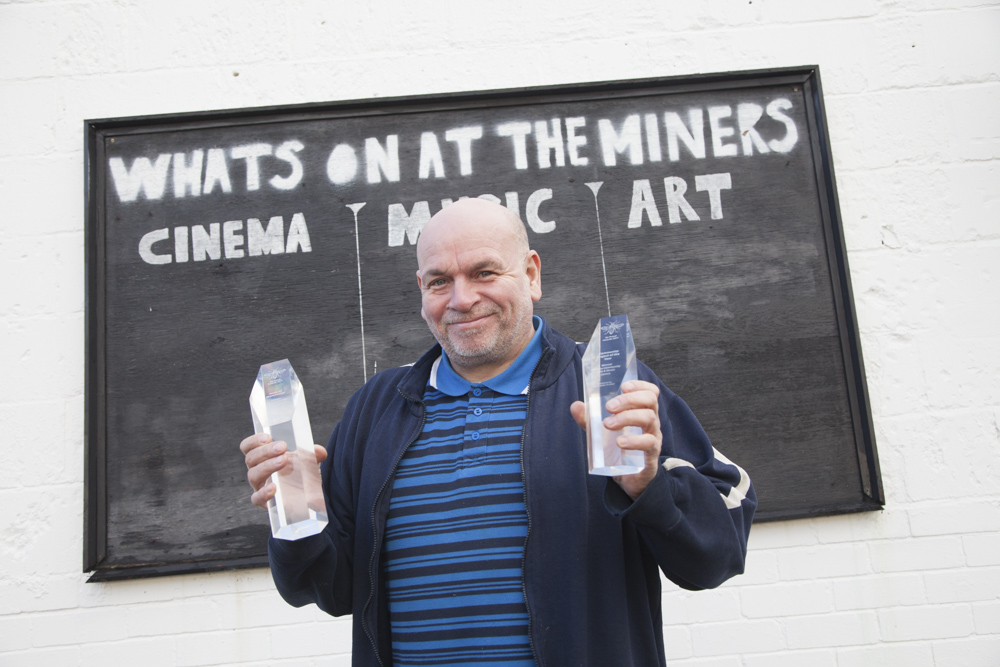 Wednesday morning is usually set aside for collecting food for their ‘Collect and Go’ food bank but the volunteer with the transport is unwell today.

“Once we’ve brought it back to this office we’ll bag it up for distribution,” explains Mary. “I’ll have to try and pick it all up first thing tomorrow morning.”

Through African Voice in Moston (AVIM) Mary Stephens and a band of volunteers have been supporting local people in North Manchester for the past six years.

From little more than two upstairs rooms on the Shiredale Estate in Harpurhey, Mary and her team help with all types of issues faced by struggling families. 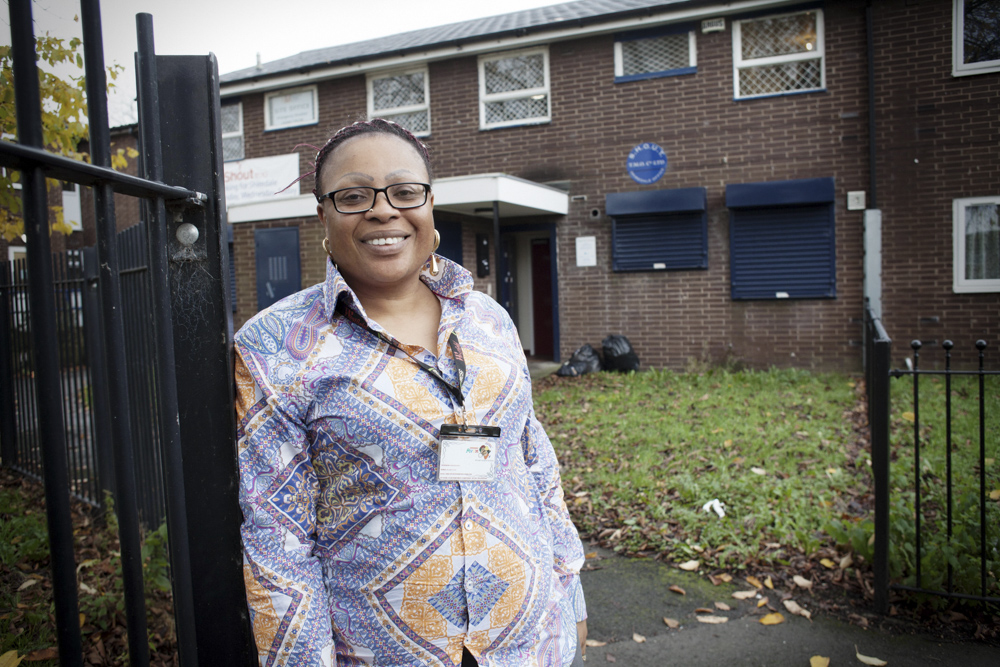 “With the weekly food bank we don’t just give out food,” she says, “we try and get to the root of the problem. When someone comes for the first time we will sit and talk about their situation. If, for instance, their benefits have stopped we can work with them to get them reinstated.”

AVIM’s support ranges from job searching to language classes to homework clubs. Over the last year they’ve had support from Forever Manchester’s Fourteen programme to run training courses that help people get work.

“It all started when there were only a few African families in Moston,” recalls Mary. “There was no advice available to help people settle into the community.”

“And good information is so important,” I suggest.

“Newcomers were unable to interpret an unfamiliar system around schools, the benefit system and immigration rules,” she says. “They were making wrong judgements about the place.”

For the first three years Mary and her team had no office but would run drop-ins at the local health centre and youth club.

“What motivates you to want to help?” I ask.

Mary laughs. “Good question. I have the best of both cultures. I was born here but have African Heritage, so I can see things from both sides. I wanted to use that perspective to help people in the community.”

As a mother of five Mary moved from London to Manchester. She studied for a university degree while pregnant with her sixth child and still found time to volunteer for the Citizens’ Advice Bureau.

“If you set your heart to it, anything is achievable,” she says. “And I wanted to get that message across to young mothers. I worked with a group to encourage pregnant teenagers to do things with their lives. Having a child should not tie you down, anything is possible.”

“And now you use that determination to help the whole community,” I suggest. “It must be very satisfying. But you don’t just help people of African descent, do you?”

“It’s only a name,” says Mary emphatically. “We provide a service to anyone in the community who needs what we offer. I always stress that. But yes, we also deal with cultural issues that others agencies may feel ill-equipped to help with. We’re able to bridge the gap.” 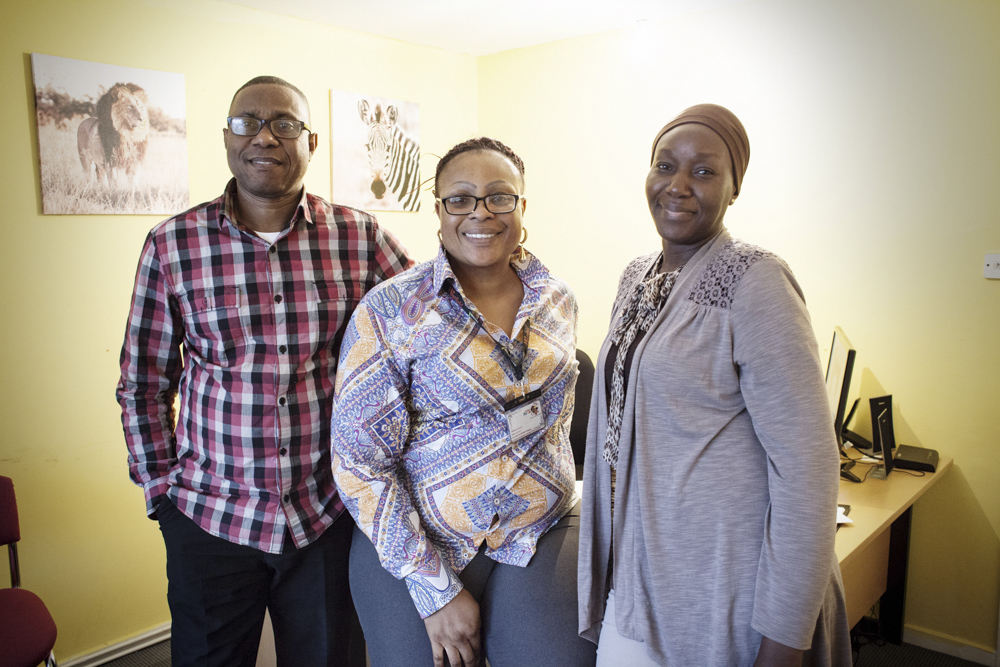 “And what of the future? I ask. “Where would you like this organisation to go?”

“We’re looking to expand,” says Mary. “We’d like to help even more people and get more volunteers on board. But we need a bigger place.”

She tells me of a building close by, owned by the Council, that has been unoccupied for a number of years. “We’d love to occupy that,” she says, “it’s on the ground floor, there are four rooms from which we could run activities. We’ve made some enquires and are waiting to hear back.”

It’s lunchtime on a chilly Friday afternoon and I’m outside a north Manchester high school as excited students stream out, finished for the week.

Amongst the mums, dads and carers are Lee and Adrian, two workers from the Mancunian Way youth charity, about to start their afternoon shift. 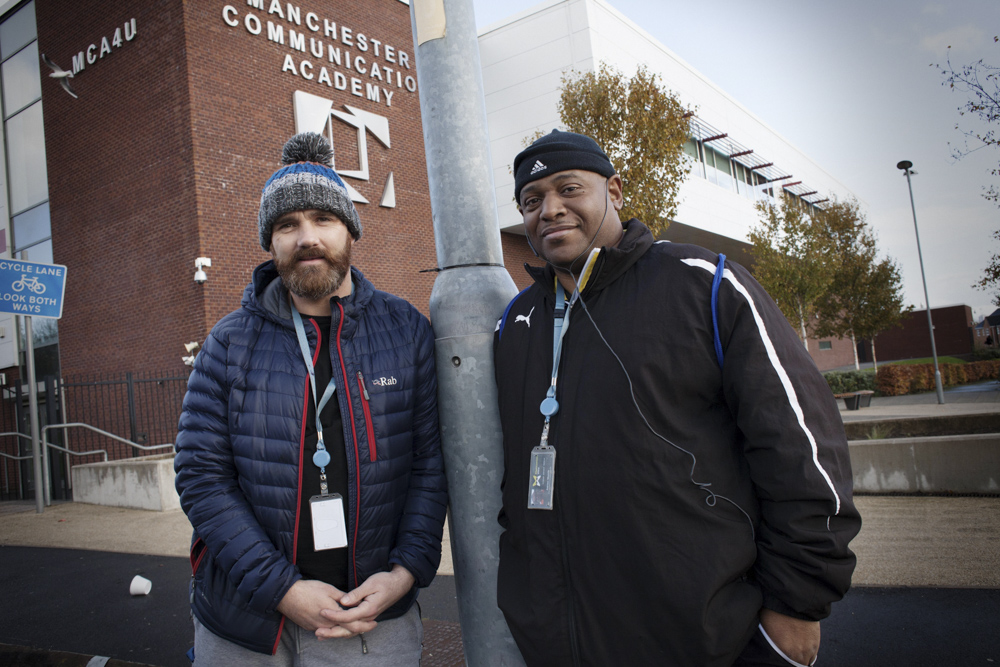 “So what’s the idea?” I ask as the children disperse in all directions.

“The main aim is to tackle anti-social behaviour,” says Lee. “In a little while we’ll head up to the takeaway where they have their dinners. Then we’ll make our way around the estate.”

Lee and Adrian are part of the charity’s Stay Safe programme funded – in this part of the city at least – by Forever Manchester’s Fourteen programme.

It’s a street-based scheme where, over time, youth workers build trust with local young people in targeted areas so they can offer advice and support when it’s needed. As well as their Friday afternoon shift, Lee and Adrian are out on these streets on Tuesday evenings too.

“To be fair most of the issues we deal with are not from students of this school,” explains Adrian as we walk towards the takeaway, “but with local kids who’ve been excluded. Even trying to hold a conversation is difficult, they only want to talk about criminality. All they’re interested in is making money in the wrong way rather than staying in school.

“Many of the young people who are antisocial don’t have a strong support structure at home,” he continues. “Maybe there’s a parent who’s alcoholic, or in prison. So there are no boundaries.

“They’re a victim of their environment?” I suggest.

“The parents aren’t bothered. The kids can do what they want.”

The takeaway is the only shop open in a row of shuttered properties in a derelict square.
I’m introduced to Paul, a 14-year-old student from the high school, who’s already eaten and is on his way home. 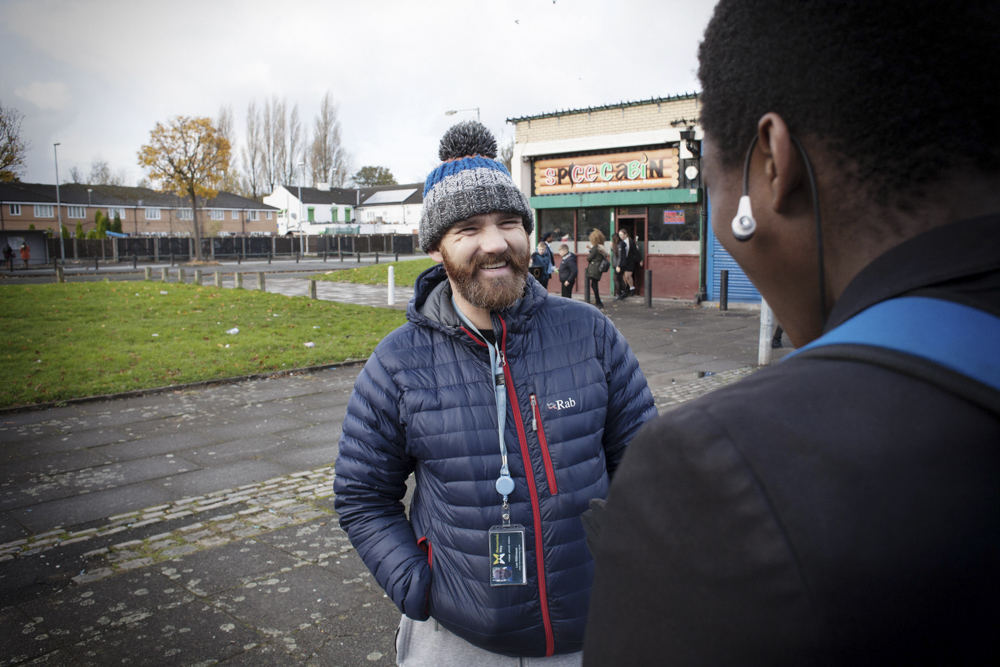 “He plays in goal for Stoke City,” says Lee by way of introduction, “and you’ve just been selected to play for England Under 15s, haven’t you?”

Paul tells me how he was trialled by the Premiership club and now travels there three times a week for training. “So what have these two ever done for you?” I ask him, cheekily.

“No pressure now,” jokes Lee, over my shoulder.

“They’ve given me lots of encouragement,” says Paul, “they tell me to keep striving forward.”

The takeaway is full to bursting with more young people forcing their way in to order their box of chicken or cone of chips. Two young lads, not in school uniform, come out and are greeted by Lee and Adrian. Their reply is not so polite.

After they’ve disappeared back into the estate Adrian explains they have recently been excluded and now attend a Pupil Referral Unit. “Sometimes you’ll get some sense out of them and sometimes you won’t,” he says, “but they’re always suspicious of new people.”

“That’s understandable,” I say. “It must be reassuring though for these youngsters to have you around.”

“They get used to seeing us,” says Lee. “We’re here week in, week out. Everyone knows why we are here. And every week we speak to someone new.”

We wander towards the 3G football pitches where small groups are running after each other, burning off energy, being kids. 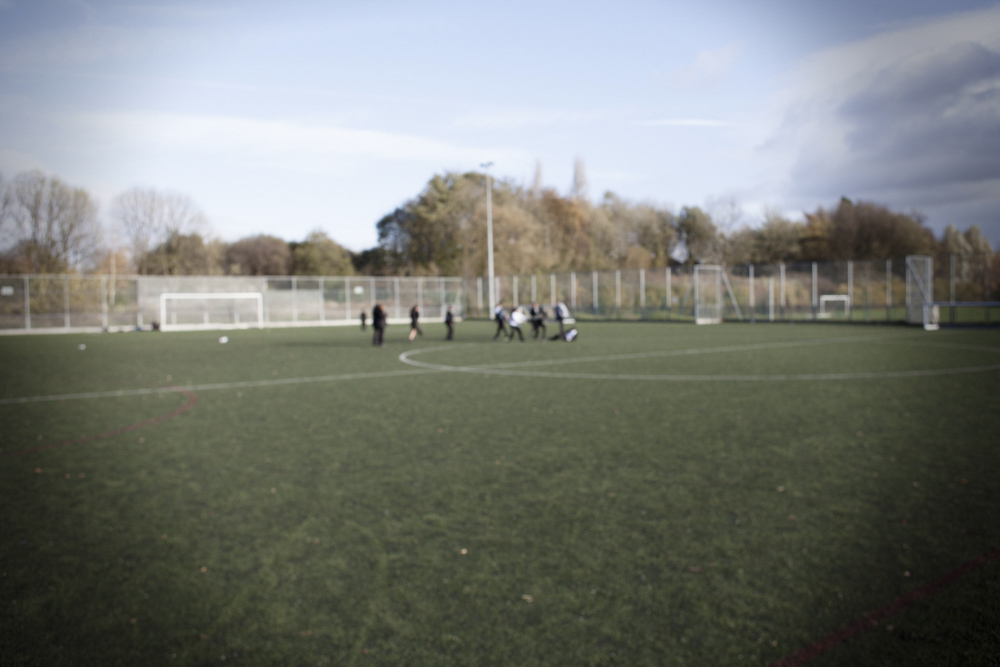 “If you had the resources,” I ask, “what would you like to see happen for young people?”

“Getting them out of their comfort zones can be really inspiring,” says Lee. “Many of these,” he waves an arm, “have never left their own patch. Experiencing the outdoors can be especially rewarding.”

“You’ve got to give young people hope,” adds Adrian. “There has to be real opportunities for them. Without hope they will turn to alternative negative activities. So tackling the lack of provision for young people is crucial.”