It’s a freezing cold January morning, thick fog, a demolition site next door but me and my Dad are on a mission. Newton Heath Health Centre here we come! It’s Covid vaccination time and nothing’s going to stop us. 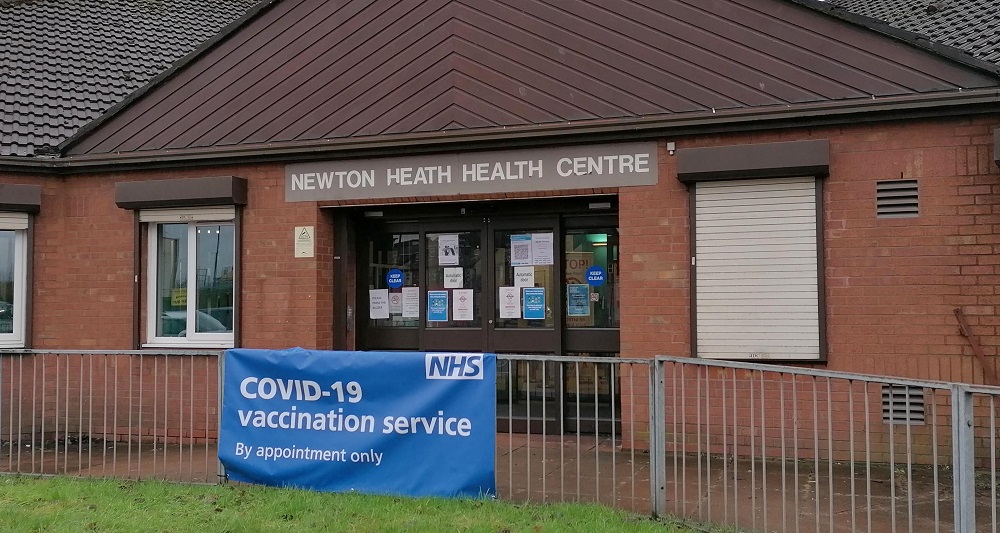 Truth be told, we were a wee bit anxious. It’s not his usual surgery so the building is unfamiliar. The road to it was blocked off but we faithfully followed the diversion signs and arrived with 5 minutes spare. Perfect!

Cheerful yellow vested volunteers looked after us from the moment we arrived, guiding us to a parking space close by and showing us where to go. Once inside our hands were sanitised and we took a place on a marker.

From there, it was a bit like being on a conveyor belt; moving smoothly from one area to the next. A recess marked for social distancing, a waiting room with seats set apart and a row of masked faces behind computers; safe and separated, checking details, signing you in.

All doors are open for a free flow of air and fewer ‘touch points’. It’s bustling but calm, everyone getting on with what they had to do.

Short wait, then a trip down the corridor into a treatment room.

Coat off and one arm stretched out. The nurse was lovely.

The sticker with the time on wouldn’t stick to his jumper so I stuck it on the back of my hand instead. It wasn’t necessary, just a precaution; someone was carefully monitoring when it was time for each patient to leave. 15 minutes passed quickly; it would have been quiet if not for Dad. He was chuckling.

“What’s tickled you?” Don’t know why I was whispering.

“I had a shave this morning, specially. Could have a beard behind this mask and no-one would know.”

We thanked everyone we spoke to; the nurse, the guides, the clerks and the volunteers in the car park. We’d have thanked the window cleaner if he’d been there. Then back home, to get warm again.

Found out later that my neighbours, an old friend of my Dad’s and Dena, local Pride of Britain Award winner no less, had all received their vaccine at the same centre on the same day. They all felt the same, it couldn’t have gone better.

Dad’s 90. He’s lucky to be amongst the first to receive the vaccine and he’ll be followed by millions of other people, all around the world.

Given the choice he’d have wanted me to have it first. But I’ll bide my time, do my best to stay safe and wait for the call.

It’s tiny thing; a little vial of liquid and a needle so fine you can’t feel it, yet it can save your life.

I rang Dad the next morning to check he was ok. “How are you feeling?”

“Just fine.” Then he added. “No, I’m better than fine. I’ve watched on and felt helpless all year. Now I feel I’ve done my bit.” 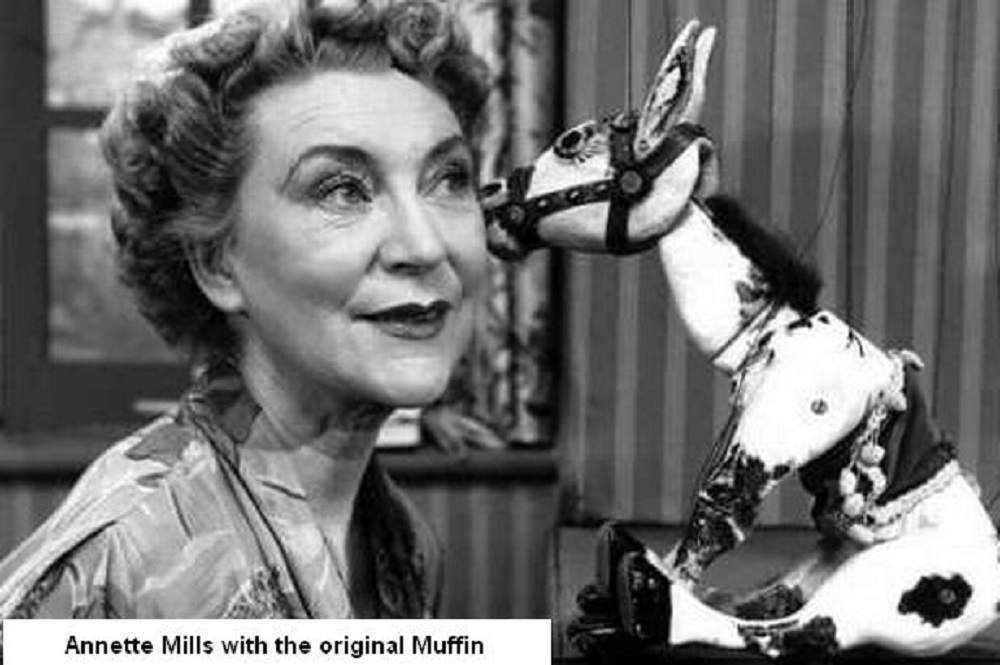 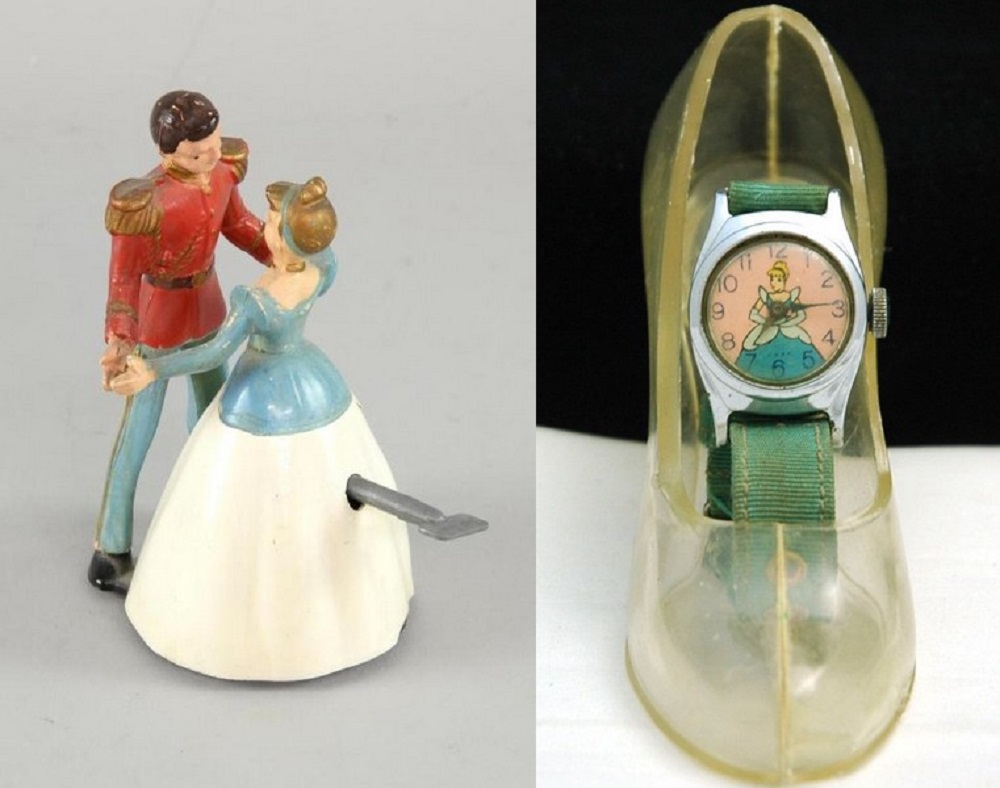 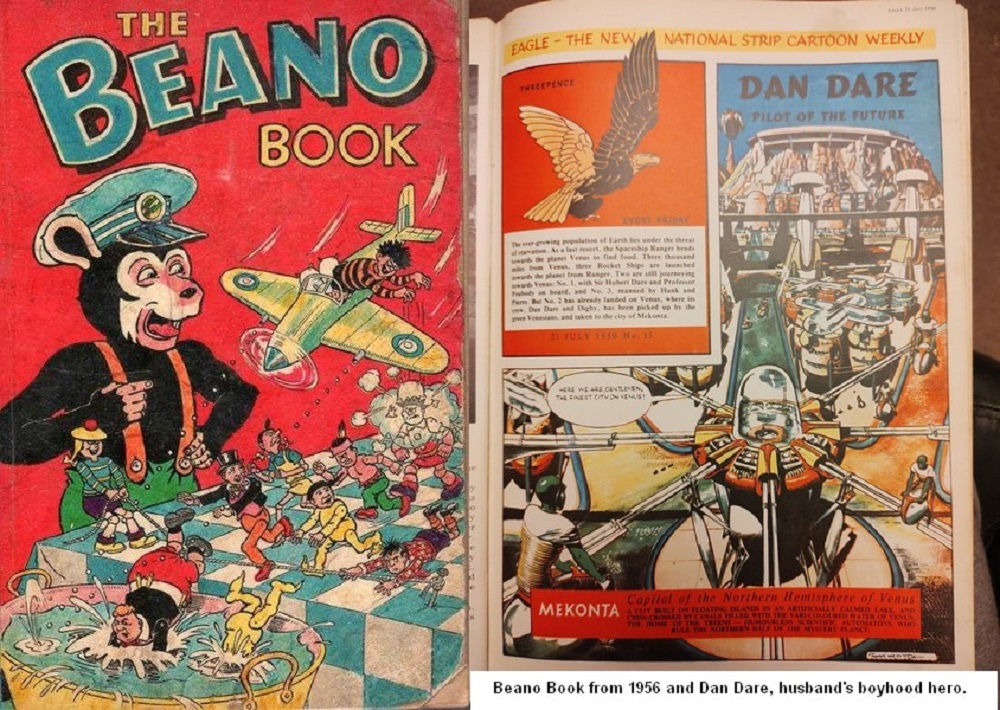 In the 1950s, northern women in their wrapover pinnies, headscarves or hairnets were on their knees at home more often than in church.

Laying fires, black leading grates, and scrubbing floors were only a few of the many domestic rituals performed on hands and knees – but there was a revolution on its way.

What we have learned to call ‘white goods’, were slowly insinuating themselves into working class homes, though they were almost never white in those days.

It would be some time yet before wash boilers or ‘Dolly tubs’ were entirely replaced by electric washing machines. And, for every meal cooked on one of the new enamel gas stoves, there were plenty still produced in ovens needing a weekly black leading.

‘Stoning’ steps was done for pride, and in areas like ours, it was a measure of a housewife’s respectability. Donkey stones could be had from the rag and bone man in exchange for old clothing. Balloons and windmills on sticks were also on offer – guess what I had to ask for?

I was sometimes allowed to brown stone the back step. Cream stone was reserved for the front which nana always did herself. 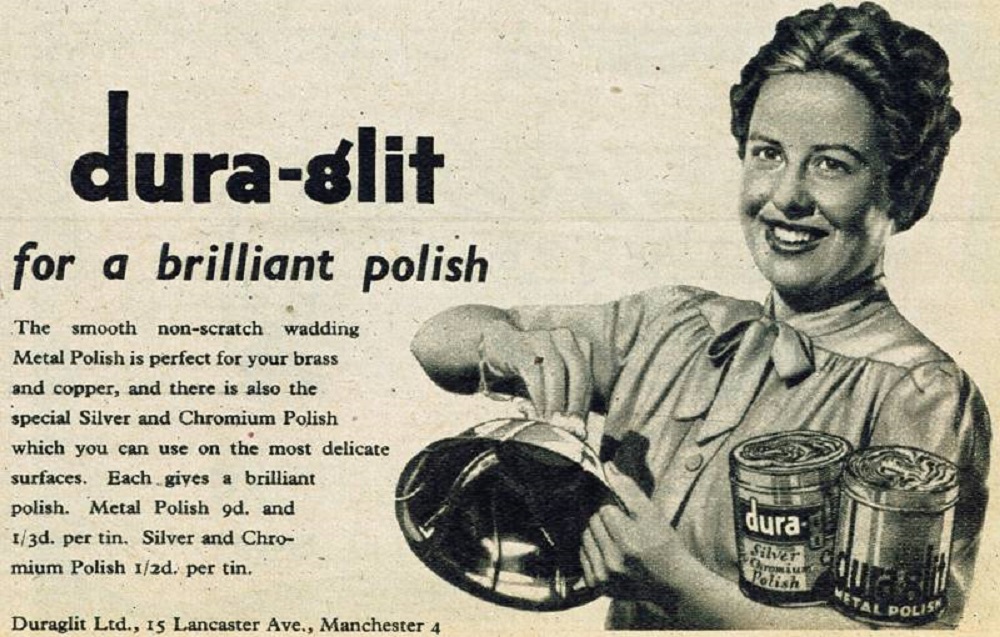 Getting the bedding and towels for a large family washed and dried, especially in winter, was worth every penny of the small sum charged for a wash-house ‘ticket’. Dilapidated prams had a second incarnation once their life as baby carriages was over, and it was a common sight to see a woman pushing one to the wash-house with the week’s laundry nestling under the hood.

At our house, ‘body linens’ were done at home. I used to enjoy scrubbing my granddad’s loose collars with a nail brush and yellow soap, while his shirts were getting a hot wash in the (gas) boiler. Less robust items went into the dolly tub for a possing. Whites were dolly-blued and sometimes starched, while curtains, dingy from much laundering, got a freshening up in ‘dolly cream’. 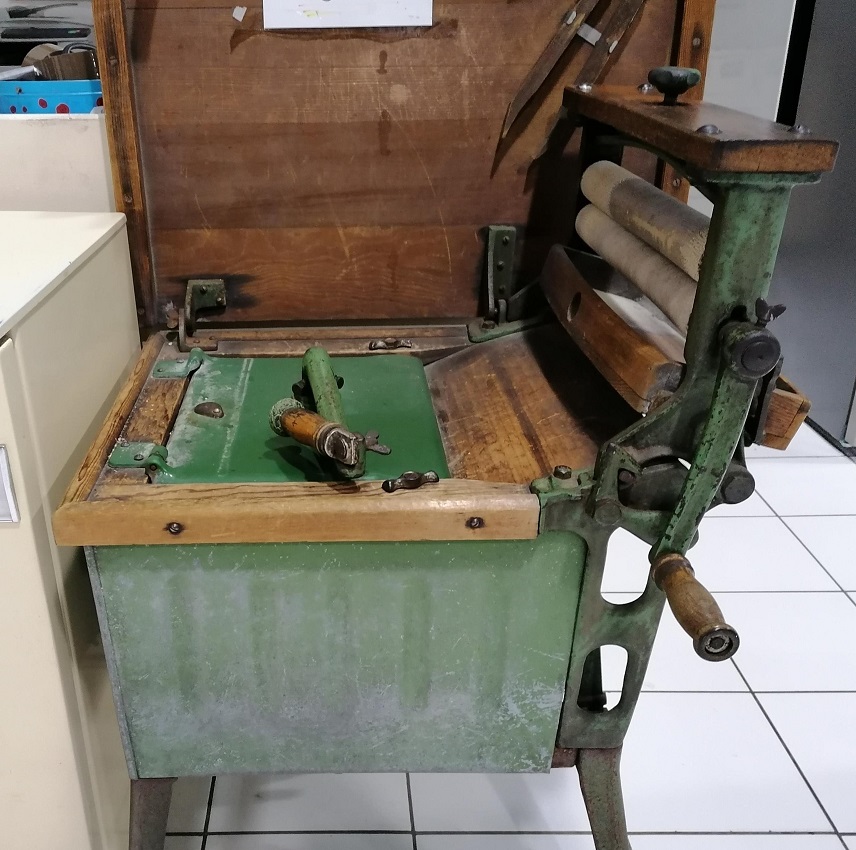 Our own nod toward modernity came when the large mangle was replaced by a wringer. It had rubber rollers that folded away under an enamel top that made a useful work surface.

On washing day, a ‘maiden’ (clothes drier) stood open around the oven and above there was a rack, suspended from the ceiling, raised and lowered on a pulley and used for airing. 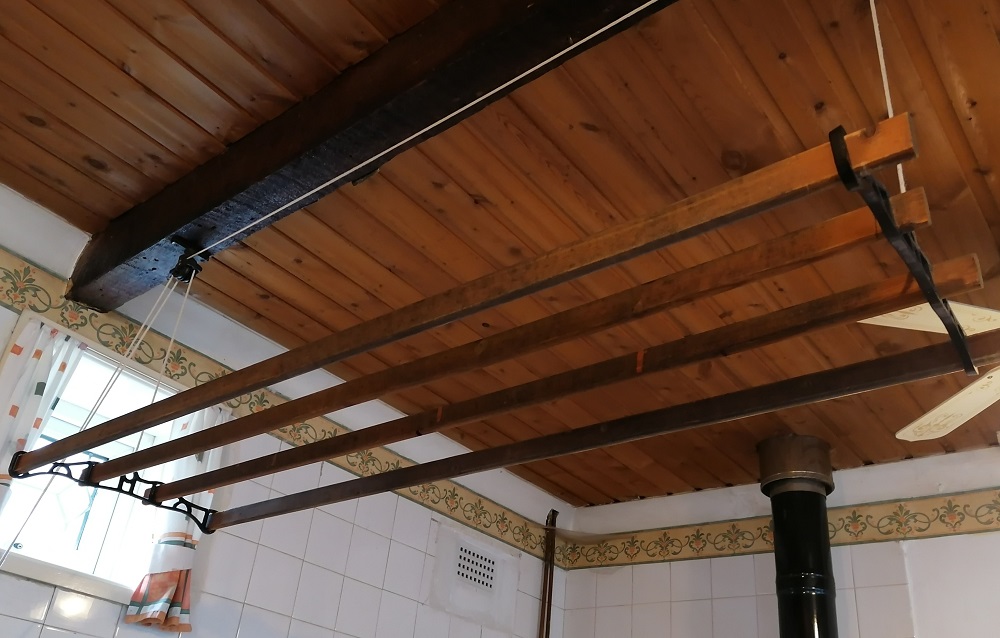 Due to her mistrust of electricity, nana’s ironing was done with a flat iron on an old blanket spread across the kitchen table.

City planners were rightly proud of the council houses that replaced the 200-year-old slum terraces of Ancoats and Collyhurst. The new houses had hot water, inside toilets and bathrooms, and the mixed blessing of indoor coal storage. Coal ’oles were handily situated next to kitchens and living rooms. Many a housewife’s heart must have broken as she saw the black dust settling on her newly cleaned surfaces with every sack of ‘nutty slack’ the coalman tipped.

Fires, grates and fenders got daily attention, but there was always the fear of incurring a fine for setting the chimney ablaze. There was a patent product called the ‘Imp’ which was put onto the fire to somehow dislodge or disperse the soot from the chimney. 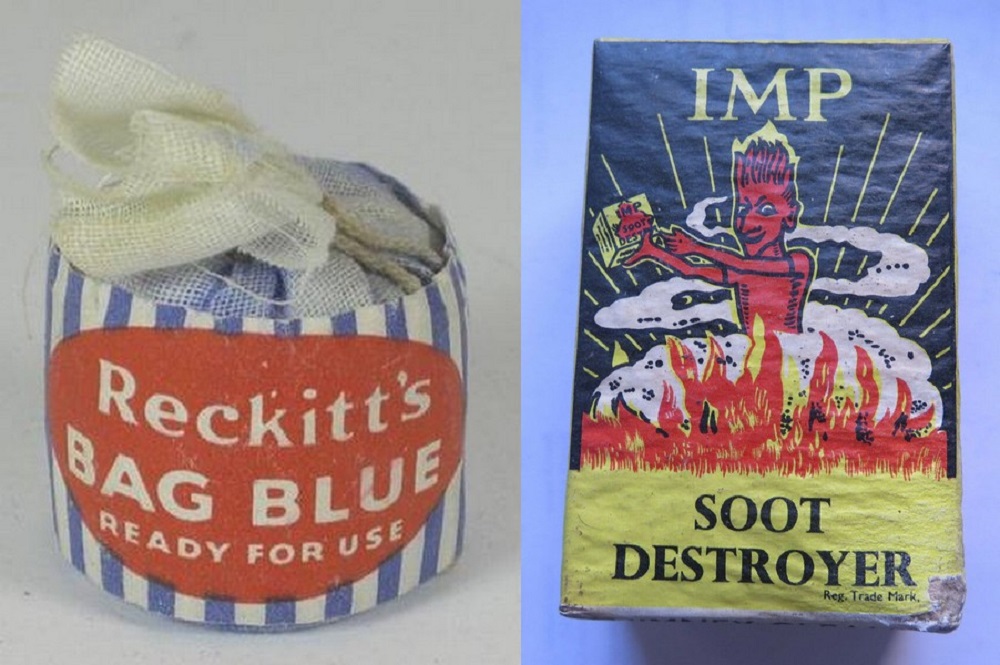 The flues on the back-to-back oven also required regular attention. First, kitchen shelves and surfaces were cleared and rugs taken outside. Then a housewife would kneel on the floor with a complicated array of long handled fire irons spread out on newspaper. Ash, fine enough to fly up at the least breath, was raked out first, followed by oily and rather sinister looking soot. Both were consigned to the dustbin before the kitchen was put to rights again.

Floors and surfaces were scrubbed and the clean shelves lined with new oil-cloth (sometimes called American cloth) – ours had a scalloped edge cut along the front to make it look nice. Clothes were returned to the rack, pots and pans went back on shelves, and, following a good beating, and mats were put down on the floor again.

That kneeling band of indomitable women, and the language of their labours, has long since been consigned to history. How many people today have heard of dolly blue, donkey stones, Zebo black lead, Duraglit, Cardinal Red, the humble posser or a Ewbank carpet sweeper?