In the olden days there was imagination. ‘Creativity’ was yet to be invented (possibly by Blue Peter). Indoor play took place in living rooms, consequently adults preferred activities that kept us sitting quietly at the table.

Many people have fond memories of Meccano, but mine are of Bayko. The construction set was the brain child of Charles Plimpton, and took its name from Bakelite, an early form of plastic, patented by Dr. Baekeland in 1907. Due to manufacturing difficulties, shades of brown were all that could be achieved initially, but by the 1950s the colours of Bayko’s miniature architecture were as bright as could be wished for. 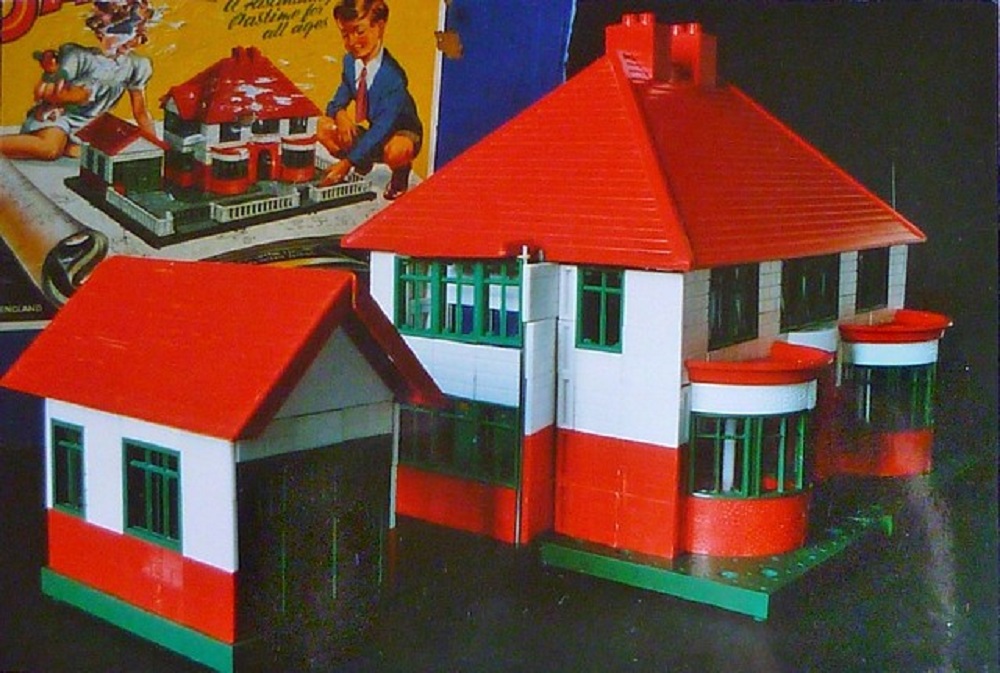 Buildings were created by sliding the modular brick tiles, windows and doors between metal rods inserted into a base. The only down side was that our creations had to be dismantled when the table was needed for meals.

Austerity was gradually receding and games like draughts, bagatelle and blow football were appearing in the shops again, as was the most prized of all – a compendium of games. Those games required at least two players, so a solitary child complaining about being bored, might receive the suggestion ‘go and find that lovely scrapbook Auntie Doris gave you’. Dutifully cutting up old greetings cards or coloured pictures from magazines, we stuck them in with flour-and-water paste.

Wartime paper shortages had put an end to cigarette cards but, in the 50s, Brooke Bond satisfied our collecting fever with their colourful tea cards. My favourite set was ‘Birds of the British Isles’, the dilemma was how to display them? To stick the cards in ‘that lovely scrapbook’ meant losing the description on the reverse. The alternative was buying a postal order to send away for the official album. This was a significant purchase when ‘poundage’, equivalent to a week’s sweet money, was added to the cost of a postal order’s face value.

Felt tips were things of the future and drawing or even scrap paper was rarely available. To us, crayoning and painting was simply filling in the outlines of a colouring book. Our paints came in a flat tin box containing small blocks of solid colour with names such as Alizarin Crimson and Burnt Sienna. Despite their exotic names the colours were disappointingly insipid, as were the chalks used on our slates and blackboards.

Possibly my most favourite presents ever were two McCall ‘Make It’ books. For many years I had to be content to simply read about the mysterious ingredients necessary for making a chemical garden. The stamp pads, glue, felt and glitter demanded for other McCall projects were less exotic, but they were still not common in our utilitarian world. 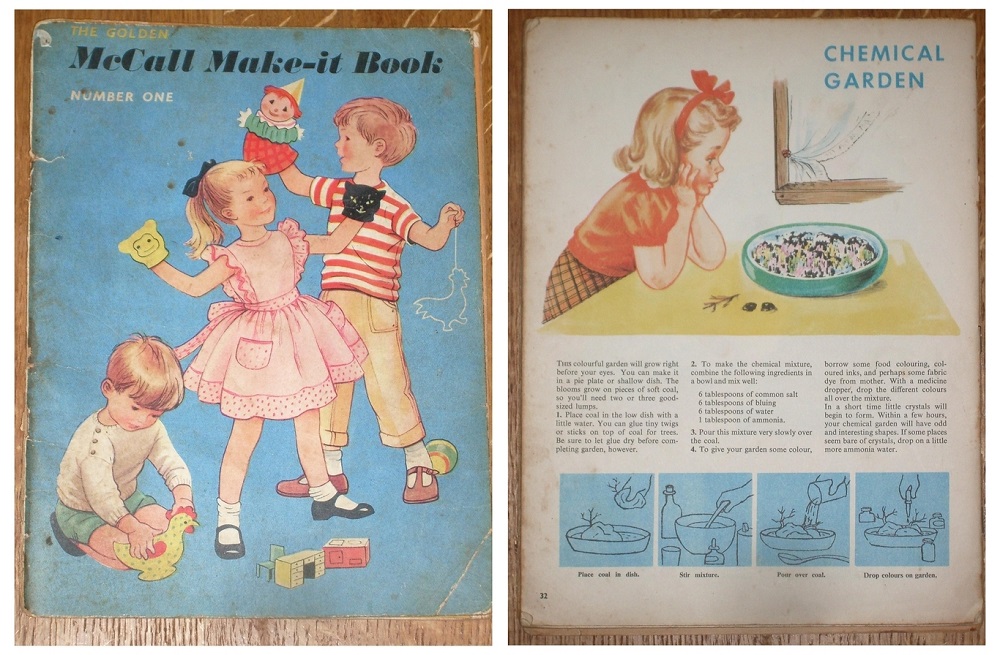 Kids used to being feral soon tired of sedentary pastimes and brought scaled-down versions of outdoor games inside. In true wartime ‘make do and mend’ style we used our family’s laundry basket, a wooden crate with sturdy rope handles which normally lived under the kitchen table. On rainy days it could be transformed into a pirate ship or stagecoach under attack from ‘red Indians’, or anything else our imagination conjured up.

Two chairs and a blanket made a tent, and with milk and a few biscuits we were happy for a while. A table covered with the ubiquitous chenille cloth made a fine den. Sometimes adults forgot we were there and would discuss subjects not normally considered suitable for ‘little pigs with big ears’.

Every house had a button-box whose contents could be raided for games of shop and the like. We also used buttons to play a sort of tiddlywinks game. Each player chose a button to propel other, usually smaller, ones along the floor. The winner was the person whose buttons got to the edge of the carpet in the fewest number of ‘flips’.

Airfix kits were a popular pastime, but a cheaper way of making models was the cut-out books available in local newsagents. There was a whole range of these roughly A4-size publications containing brightly coloured things to make. They ranged from model vehicles to ‘dressing up’ dolls. 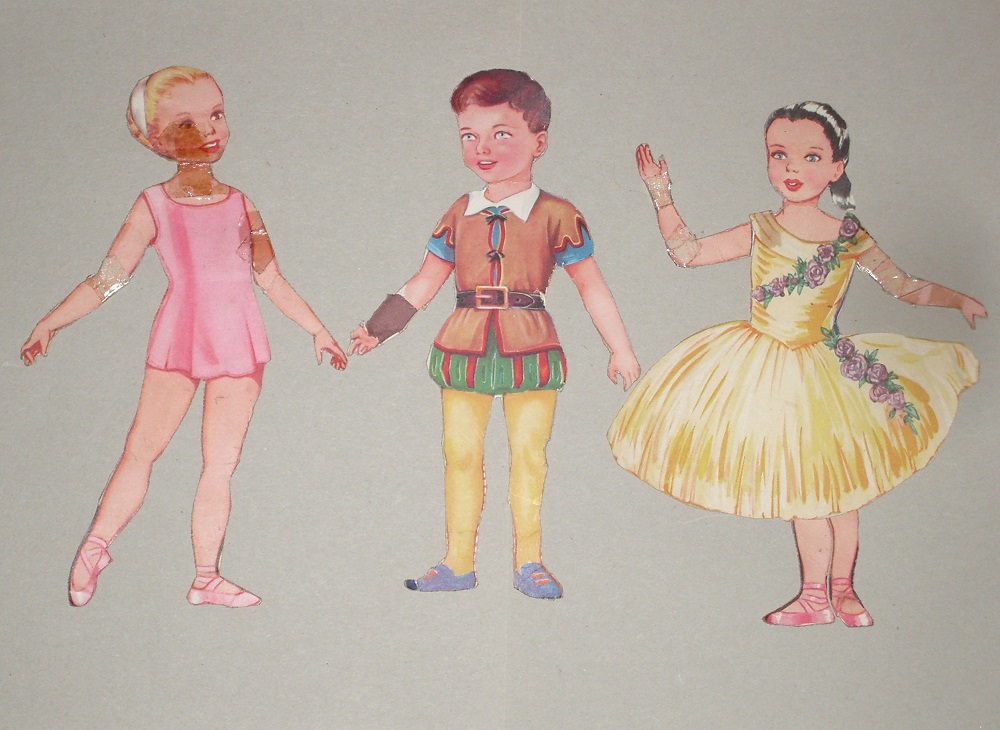 Time and patience was required for the fiddly cutting out in those pre-sellotape days, when a slip of the scissors could spell disaster. The figures came printed on thin card and the paper outfits had small tabs which folded around the doll to keep them in place. My sister and I often combined forces to act out plays with our dolls as the characters.

Such ephemera ought to be long gone but my daughter, aged 47, is now the custodian of the family collection of cut-out dolls, complete with repairs done with 50’s sticking plaster or ancient sellotape.