I was born in the legendary ‘terrible winter’ of 47. 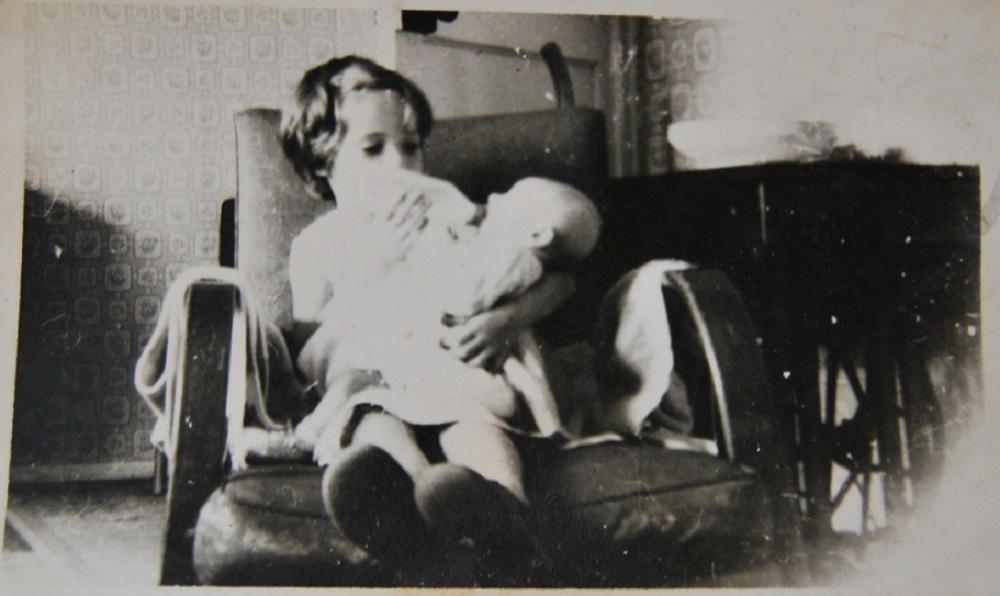 Even when coal ceased to be rationed, the supply often ran out before the next delivery. Consequently, to survive the privations, new-borns had to be toughened up from day one.

My mother used to pin me into the bedclothes of my cot, to prevent me getting my hands free during the night. Even with ice on the inside of windows, I never lost a single finger to frost bite, so it must have worked. However, it has left me with a phobia about having my arms confined.

We were the Virol, rusks and National Dried Milk generation, when clothing substituted for the central heating lacking in our houses. Swaddling was out of date, but babies less than 5 lbs were kept in cotton wool jackets (not removed, even for washing) until the required weight was achieved. 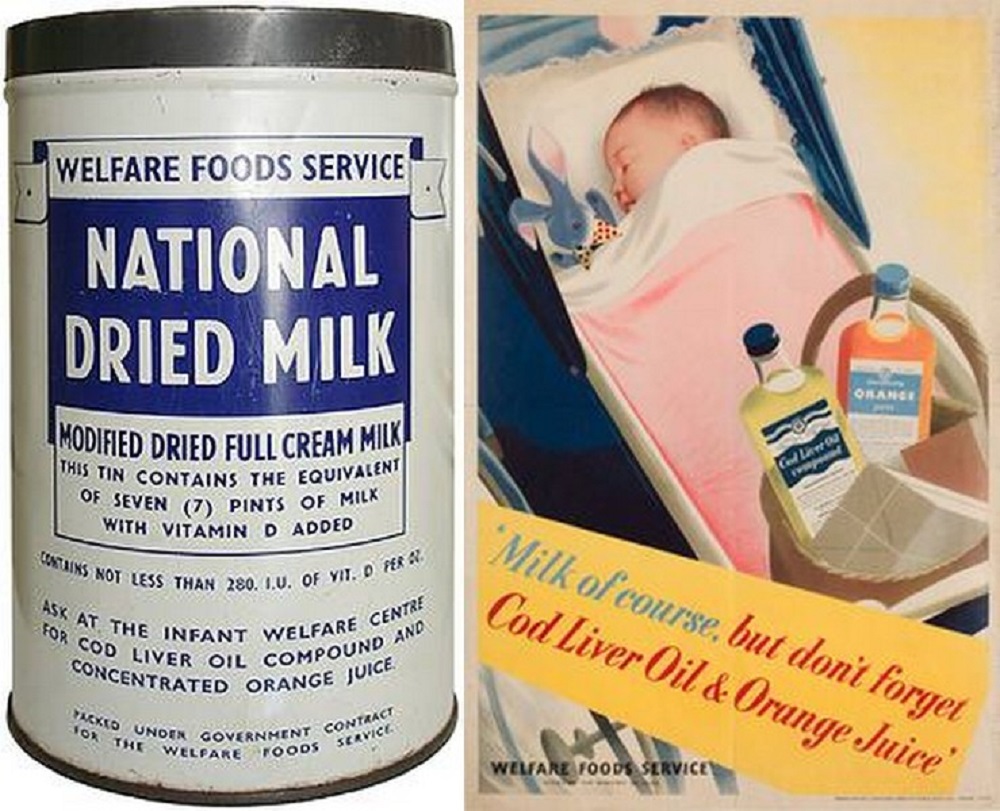 Even when a house had a bathroom, lack of heating meant babies were often bathed in a large pot sink in the warm kitchen. A mother whose baby wasn’t wearing wool next to the skin, with its little bottom plastered in zinc and castor oil, would make herself the talk of the Welfare clinic.

Terry nappies were expensive, and only came in one size – huge. They had to survive daily boil washes until the family’s youngest child was toilet trained. By the early fifties, most babies wore rubber pants, but knitting patterns for the ‘pilch’ (a natural wool garment worn over nappies) was still available.

Vest and nappy were covered by layers of winceyette, leaving the now globular-shaped baby to be topped off with something smart but impractical. The preference was for dresses, romper suits or the unisex leggings and matinee jackets with gender appropriate headgear. 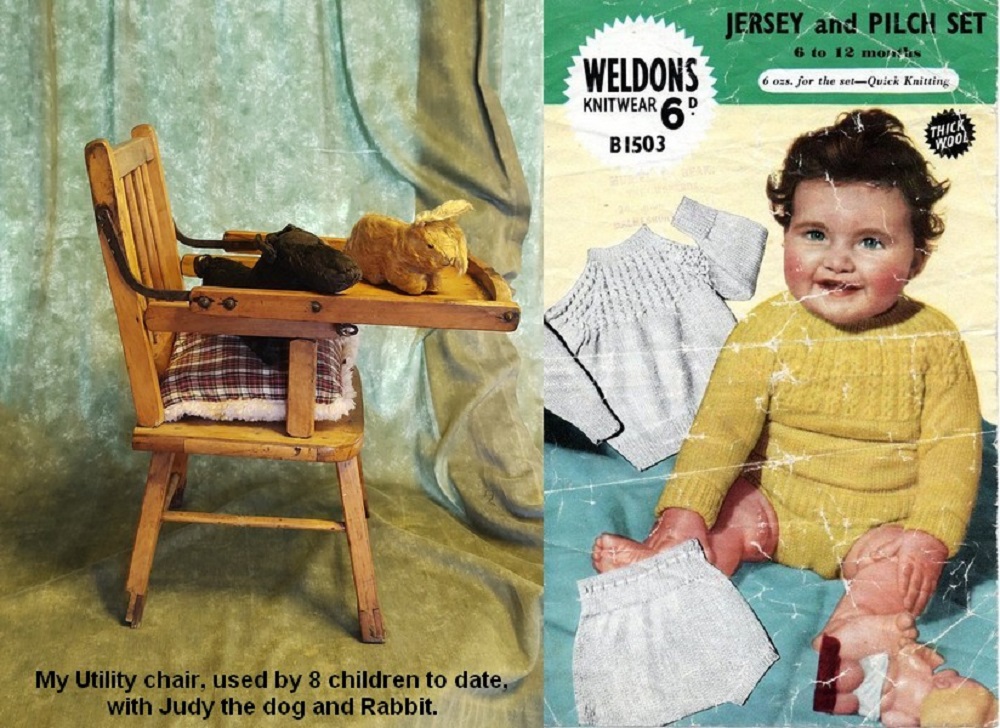 Unlike many fathers of the time, dad could change a nappy, though his method was unorthodox. He was also happy to baby-sit while mum had a night out at the pictures with my grandparents. One night, following a 12-hour shift on GPO ‘Christmas pressure’, he settled himself to listen to Saturday Night Theatre with his tired feet in a bowl of water. There was a scream, and dad was halfway up the stairs before realising it came from the wireless rather than my cot. Mum arrived home to find him sheepishly mopping the sopping carpet.

The presents babies received were like children of the past: seen but not heard. We had to be satisfied with the sound of rattles and humming tops, while today everything from a mobile to a potty plays a nursery rhyme or animal noise. 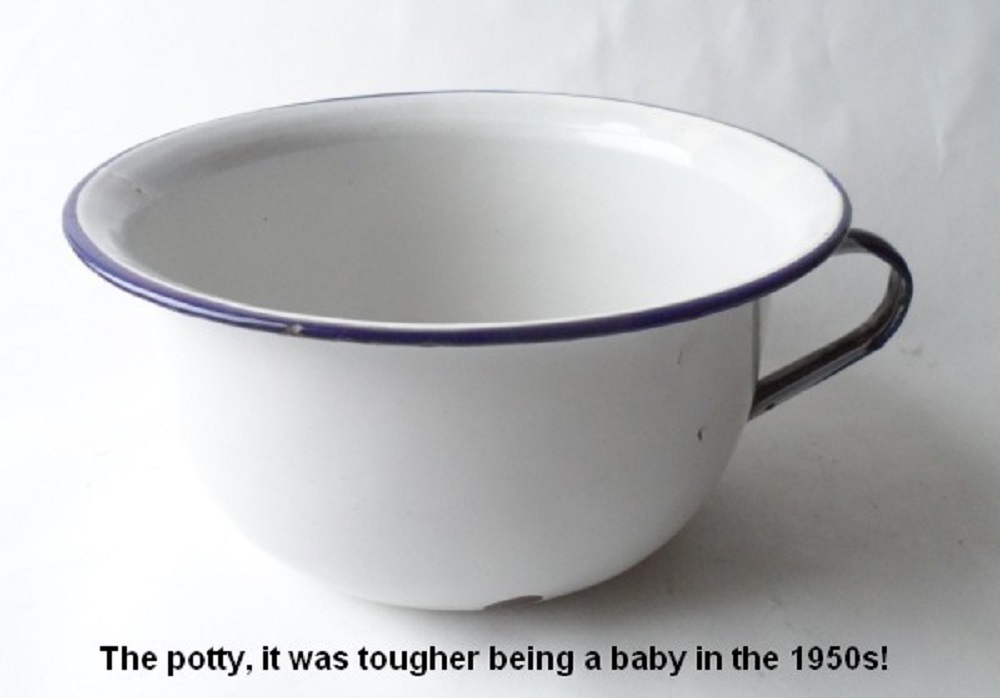 The most traditional gift for new-borns was a teddy bear. Dad won mine at a fair before I was born. I would describe Ted’s appearance as unique rather than scary, but for the sake of persons with a nervous disposition, his picture has been withheld.

None of my surviving toys has ever been washed. With children’s propensity for putting everything straight into their mouths, it’s amazing so little consideration was given to hygiene and safety in the past.

Another inexplicable thing is the adult conspiracy that kept children believing babies materialised from nowhere. My own first intimation there was ‘summat up’, was getting home from afternoon school to find a ‘little stranger’ asleep in my old cot.

Prior to my sister’s arrival, living alongside me were 4 adults in a small council house. If she had been born in the 21st century, her bath, bouncy chair, Moses basket with stand and the myriad other essentials she couldn’t have done without, would have necessitated an extension.

Unoccupied coach-built prams were a menace in narrow lobbies and passages. But no self-respecting mother would fail to put the swanky pram outside for her baby to get its daily dose of ‘fresh air’. 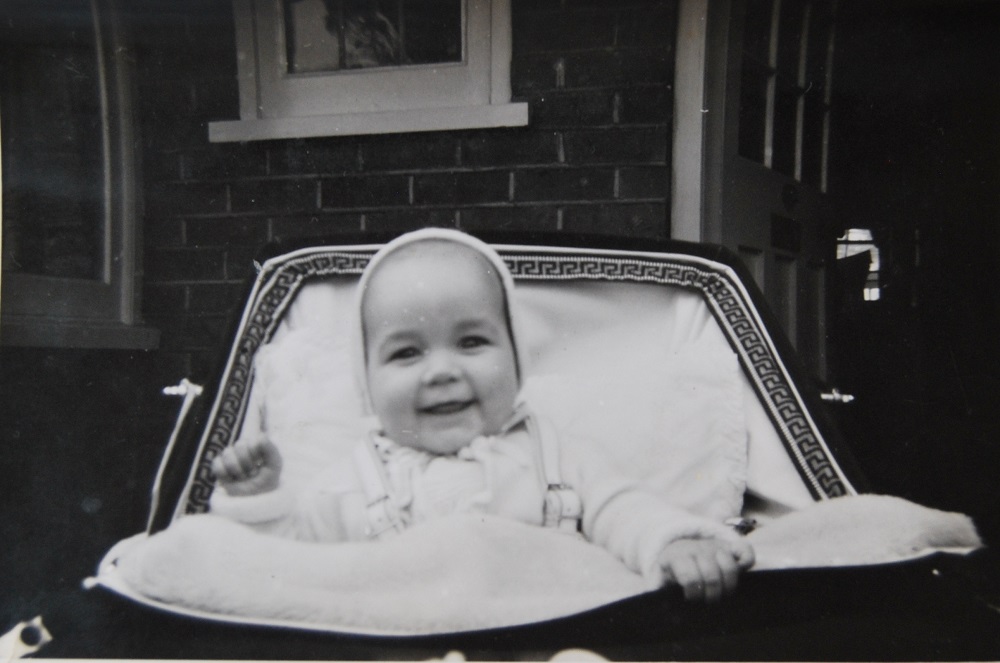 Children stayed in their prams far longer back then. By removing some of the base panels, an older child could sit upright with the rest of the ‘bilge’ being utilised for the shopping.

Tumbles from prams must have been common before harnesses were fitted as standard. Strangely, when there were far fewer speeding motor vehicles, more toddlers were to be seen wearing reins looped over the arm of a parent or responsible sibling. 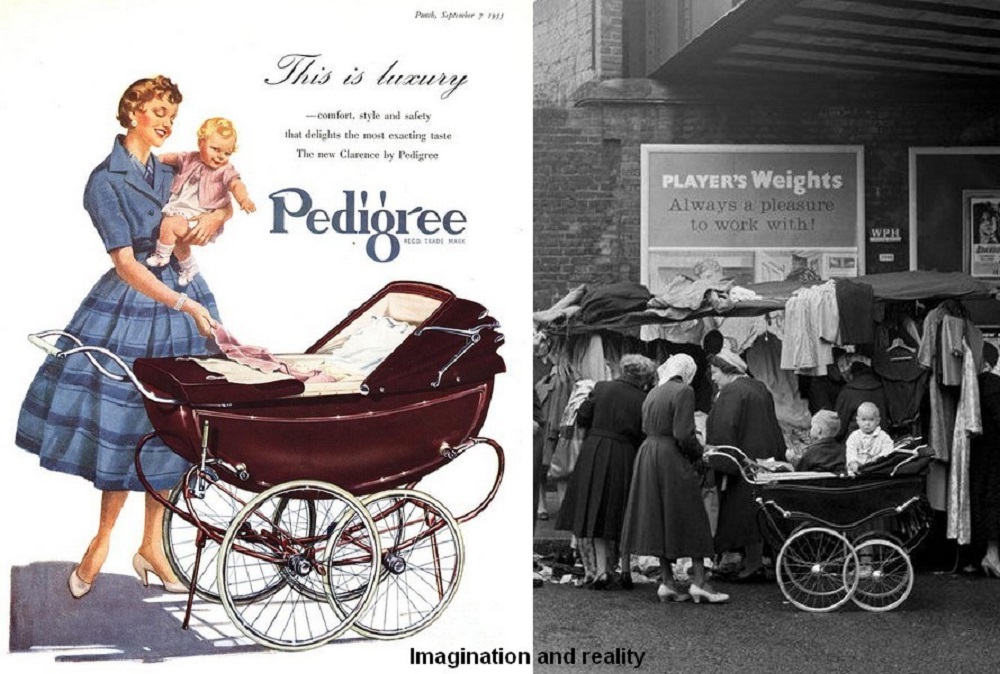 Today’s all-terrain pushchairs and ergonomic baby seats are all very well, but as a child, I would have traded the lot for a bottle of that concentrated orange juice from ‘the Welfare’.